What is a day in the life of a local Hong Kong mid-20s college educated professional? Curious to see how they live their life on a normal 9 to 5. Today we’ll do our best to give some perspective and insight on what a normal work day is for a Hong Kong local.

Wake Up 8am, At Parent’s Apartment

Hong Kong gets started a bit later in the morning. I’d say 8am most people are waking up and getting ready for their job.

Most in their 20s and many in their 30s are living at home with their parents. Why? Because rent and housing is so expensive they cannot afford to move out. The average salary compared to the rental costs don’t match up. So the culture and the way of life has become accustomed to having children stay at home much later in life.

Also, a lot of times the culture pushes the male to buy a home when they get married. In today’s record high housing prices- that is quite a big feat! So the son will stay living at home, earning as much as he can, and saving it all in a bank account so that he can buy a home. This is to also impress his mate into marrying him, and showing his finance’s family that he is financially stable and will take good care of their daughter.

So back to the daily grind, the 25 year old college graduate will prepare for work at home. Mom is in the kitchen, or, often a live in maid is making breakfast for the household.

Once the 25 year old is done with showering and dressing, they’ll hop over to the kitchen table and grab breakfast that was prepared for them. It is usually in a rush, because they are maximizing the amount of time from waking up later, preparing for work, and getting their grub.

Go to the Nearest MTR Station

Everyone lives off the MTR system, which is the local naming of the subway system. There are stations well spread out in most major residential areas. Many commuters have a MTR mobile app that shows them the schedule of the next train and if there are any delays.

The MTR is one of the most efficient transportation systems in the world, and moves a huge volume of people without too much delay. If you go to the MTR in the 9am timeframe, you’ll see it quite backed up, but new trains are coming every few minutes to help move people along at such a fast pace.

Because of this high volume and crowded system, the local people have become accustomed to dealing with close encounters. Westerners get annoyed that there is someone’s armpit in their face, but in Hong Kong rush hour traffic, you just hold your breath and play the latest mobile phone game.

Might Also Need a Mini Bus To Get To the MTR

Depending on how far from the “beaten path” you are, you may need to first take a mini bus. These guys are fast and wild! They have numbers and dedicated stops, and Google Maps also recognizes them on the direction feature. But you need to keep a close eye out for your stop as if no one else requests it – the driver will just zip by.

Normally you take the mini bus to the last stop, which is most of the time at or near an MTR station. From there, everyone files out and goes into the MTR station to get to their final destination.

Commuting in Hong Kong is very effective, and you can get by without needing a car.

Arrive At Office 9am to 10am

For the most part, Hong Kong starts later and works later. A lot of banks don’t open up until 10am, I’m not sure if the staff come earlier or they also start at 10am – but if you walk around HK in the morning before 8am, you’ll be shocked. It is like a ghost town, the shops are closed, restaurants still aren’t open, etc. And just a few hours later it is overcrowded with people, shops buzzing with buyers, and restaurants full.

It’s just part of the culture. So most office workers won’t get in until about 9:30am timeframe. Unlike what I mentioned in daily life of Shenzhen workers, Hong Kong staff won’t bring their breakfast into the office (from my experience) and are there to get to work right away.

Now they’re at their desk. What does the normal 25 year old local Hong Kong college grad do for a job? Tons are in banking and finance. Hong Kong is a massive bank in and of itself, so that means plenty of job opportunities. After banking, I’d say logistics. While there aren’t many factories left in HK, you still have a ton of products from Shenzhen and other parts of China coming into Hong Kong to then be shipped out internationally. So you need a lot of staff to handle the Chinese and English balancing of order and communication. And the last main job would be in retail. Tons of shops all across the city with lots of Mainland Chinese tourist buyers and the local economy is still very “brick and mortar” retail focused.

So they’ll get started at one of these 3 types of jobs for the most part. Work from 10am-ish until 1pm-ish.

Because the work day starts later, lunch is also a bit later. If you want to have a quiet lunch, get to the restaurant at 12noon! 🙂 By 1pm, restaurants are jam packed. No company cafeterias, and rarely does anyone pack a lunch. It is part of the system to go out for lunch with your work colleagues or friends in the area.

Lunch is an hour. No nap time like I mentioned in Mainland China. Hong Kong is truly a mashup of East and West, and in the work culture, I would say it is more Western than Chinese.

Work is for work, and outside is for eating and resting. You won’t see people bringing in sleeping cots and pillows to the office in a Hong Kong office.

Back to Work at 2pm

After the late lunch and a bit of a break, the office is back buzzing at 2pm. People are there to finish the work day. Normally around 6pm or 7pm is when things will wrap up.

Afternoon is more of the same as the morning session. The main difference is it is MUCH BUSIER. Banks always beg me when I’m booking banking appointments for clients to do it in the morning.

For some reason, people want to do their shopping and outside work in the afternoon. Maybe it is more about the culture and “being fully energized to get out”. Whatever it is- the afternoon seems like when the peak of productivity happens in the Hong Kong work environment. So be prepared.

Out of the Office 7pm-ish

Hong Kong people work late! There isn’t too much commuter traffic in the subway systems at the typical 5pm you’d see in New York. Maybe it’s also the later start, but Hong Kong office workers are normally cranking away until 7pm.

So expect the subway systems to get overcrowded at about 6:30pm until a bout 8:30pm.

Where do people go after work? Because the apartments are so small, and many live with their parents, they choose to go to a restaurant or cafe. This is their only real free time in the week to see friends, to date, to have a life.

There is a bit more of a bar and drinking culture here, but again, that is mainly the expats filling up the pubs. But you can find some fun local Hong Kong style pubs for the locals who are stressed from a long day work to decompress.

Yet like Mainland China, a lot of the young professionals are instead doing their bonding and making friends at a restaurant, cafe, or maybe the occasional KTV.

And they will stay up late (for me anyway). It is normal for the get togethers to last past 10pm. Even networking events that I am used to ending around 9pm go on until 10pm or so. It is part of the hustle and the bustle of the city life. People are enjoying their life and the evening is when they can spread their wings and fly.

Repeat The Next Day in Hong Kong

So once they finish their get togethers, they’ll again take the MTR back home. Try not to wake up their parents, but normally parents are up late here too. Get settled for bed, and prepare to repeat the process the next day.

Hong Kong life is a busy city life similar to Manhattan. Many are under a lot of pressure, and also have to balance being at the crossroads of 2 major cultures and economies: USA and China. Even for me with almost a decade hopping between these borders, it takes a toll on you. Your identity, your schedule, your holidays.

It is also worth noting now the holiday schedule in Hong Kong. Basically it is pretty awesome for staff – you get both Chinese and Western holidays. The only catch is it is shortened length on both sides. So you have Christmas day off, and you have Chinese New Year (a few days). But neither are as long as they are in their native areas.

But this is what makes Hong Kong such a vibrant city! So many cultures, languages, right at the crossroads of all our global economies mixing together with technology and the internet. 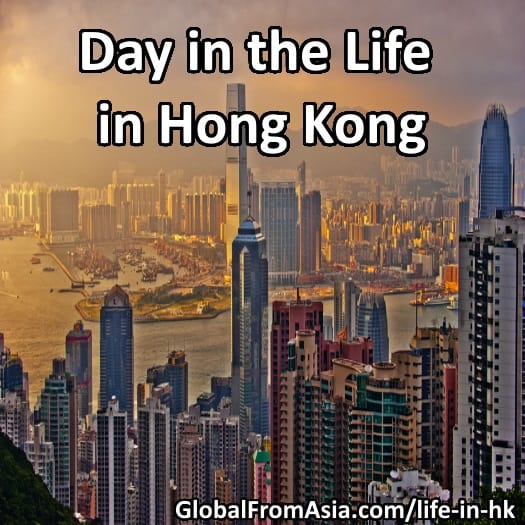 Be a Smart Business Traveler With These Apps In Asia