Preparing to travel to China?

Wondering which websites you can access while on your business trip?

Today we are listing out those sites (well, as many as we can because the list goes on!). So prepare yourself because hugely popular websites you use on a regular basis are not going to open for you in China.

First – Why Does China Block Websites?

In 1994 China connected to the world wide web. Yet over time, the government worked on ways to block certain websites including the most popular websites in the world. When the Internet first came out, China thought it could be a wonderful thing, but soon they realized that the Internet is uncontrollable.

It has easily given power to an individual to become limitless with information and has opened a new medium of communication that entails free flow of thoughts and ideas – that may ignite social and political catastrophe.

Three reasons why China has blocked all these websites

Blocked Popular Websites and Why They Are Banned

Many people ask us which websites are blocked in China, so that when they make the trip, they are prepared!

We have made the list below of websites that you cannot open while using Mainland Chinese internet. If you’re interested in learning how to get around it while in China, check out our how to use a VPN in China guide.

1. Google
Why is Google blocked in China? In 2010, Google had a dispute with China over internet censorship in the country. The government basically wanted Google to filter search results, but Google refused because they stand for freedom of information.

2. Facebook
Facebook was blocked mainly because Chinese officials wanted to prevent leak of vast Chinese customer data. In addition, there is simply too many fake news/information found in Facebook. Lastly, China has their own versions of social media called WeChat, Weibo & Renren.

3. Youtube
China seems to hate competition so much it blocked the most popular streaming site to make way for their own homegrown site called Youku. Youku basically works like Youtube. Only, it is fully regulated by the Chinese government that has a full control of the contents.

4. Blogging Platforms (WordPress, Blogspot, Blogger, Tumblr)
With these free blogging platforms, anyone could voice out anything, even something that could be harmful to China’s authoritarian regime. Hence, these websites were blocked to avoid the criticizing voices of people against the Chinese government.

6. Thepiratebay
Thepiratebay is the most popular niche for torrents and as this website promotes piracy and has sensitive contents, it has been blocked by China.

7. Media/Publication (The New York Times, Google News, Daily Motion, Time)
The reason why these websites were blocked are pretty obvious: to conceal articles that criticizes their government. Any media/publication that contains articles that seem unfavourable by the government are banned in China. For instance, The NY Times once published an article titled “Billions in Hidden Riches for Family of Chinese Leader”.

8. VPNs.
A VPN or Virtual Private Network is the long-standing rival of the Great Firewall of China. It evades the Internet censorship and gives the people access to the blocked sites. Of course, China made their ways to block certain VPN providers like OpenVPN, StrongVPN and PureVPN. But then, this censorship is a hard battle to fight as there still are numerous VPN providers in the web that are accessible and perfectly working.

9.Instagram
In 2014, people, mostly students, started pro-democracy protests in Hong Kong. Photos were instantly shared on Facebook, Twitter and Instagram like fire. China seemed threatened by how these photos could be an inspiration to its people to start protests against their own government. Thus, it blocked the most popular photo-sharing platform.

10. Wikipedia
To keep the unfavourable information away from people, China has blocked certain pages of Wikipedia containing misleading and adverse information. Also, just recently, the government of China introduced the digitized Chinese Encyclopedia – which is rumoured to go public in 2018. No updates yet as of this time. This would apparently serve as an alternative to Wikipedia. Once the Chinese encyclopedia is released, Wikipedia would probably be fully blocked by then.

Whatsapp, the messaging app owned by Facebook, always noticed delayed sending and intermittent sending. Many felt it was only a matter of time – and as predicted Whatsapp became blocked inside of China in the summer of 2017.

Skype (Use Skype by Tom)

Skype isn’t 100% blocked in China. But the thing is, if you try to download the international version from inside China, it will redirect you to the Tom version, which is hosted inside of China. Many have problems getting the English international version from inside of Mainland China, and we recommend downloading it while still overseas and then signing in from China.

Yes even this innocent and fun social mobile app is not accessible inside of Mainland China. By now you are noticing on this list social media apps outside of China are almost all blocked.

This is because it is user generated, and users can spread information that the Chinese government does not approve of. Therefore it needs to be regulated by a Chinese company with the proper licenses.

Websites that are NOT Blocked in China

LinkedIn! Yes, the popular international business and professional networking social media platform still works in China. We think it is because they made some special discussions and arrangements for Chinese users and they have a presence on the ground in China to make this happen. Plus, China does want business people in their country to do business globally, right? So let’s hope this stays open.

Yes, another popular site that is working in China is Quora. Maybe they are moderating their content more, or also have some special arrangement. Our idea is they filter much more the content that is posted.

Writing about Chinese aggressive censorship is a pretty dark topic to talk about. The reason why certain websites are blocked is just obscure. Personally, I think it is a terrible idea to be deprived of information or freedom of expression. But at the same time, I can think of more possible reasons why China has been restrictive, and I am pretty sure there is more to this story. Does it aim to protect its people? Or to protect the government?

I wonder how the Chinese citizens take their loss of freedom of expression and where these restrictions will lead them to. For the Chinese government, blocking these websites is a hard and never-ending battle to fight, because people will always try to find a way into the world wide web.

Will they unblock these sites in the future?

Maybe yes, if enough people demand for change. Maybe not, because giving up such power is very unlikely for the Chinese government.

Don’t let this make you “restricted”! If you’re in China – you need to access these services, check out our free VPN China guide.

What Is Your Opinion on Why Sites Are Blocked in China?

We would love to hear your ideas and suggestions on what the reasons are behind China blocking websites, send in your poll vote below!

Stay up to date with the latest changes in VPNs and blocked websites in China by joining our free email alert list. Join below!

There are still ways (even in 2018) to access these blocked sites inside Mainland China – we have discussed VPNs – and have written a free guide and comparison for you to check out. It is a great “next reading” piece from this blog post, check out the China VPN guide.

Learn how to use a VPN in China! 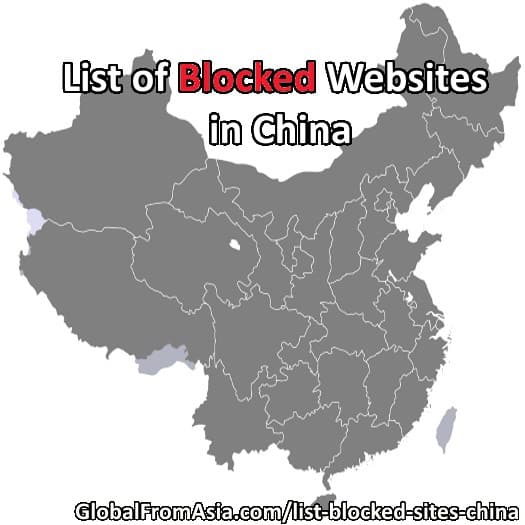 Hotels to Stay in Shenzhen for Your Business Trip

What is a BRC?

Contracts in China: How to Protect Yourself

How Shopify Can Help Expand Your Business in Asia