It’s that time of year again, when people plan for the coming year — travels, events (like weddings, company outings, parties), resolutions, projects, vacations, etc. Planning ahead is important, as they say “Planning ahead is a measure of class. The rich and even the middle class plan for future generations, but the poor can plan ahead only a few weeks or days.”

Time management skills are vital to individuals or businesses, without it, executing a project can be tough.

Planning something for 2018? Here’s a list of Chinese Holidays you must observe before planning ahead.

Explanation of Each Chinese Holiday

Now, let’s take a look at each holiday and what it exists for:

One of China’s 7 official holidays is New Year’s Day. Almost every culture in the world celebrates New Year’s Day in the grandest possible way. Meanwhile, in China, January 1st is basically a prelude to the forthcoming Chinese New Year festivities.

Also known as the Lunar New Year. Spring Festival Eve is a night of celebration to end the previous year. As a tradition, Chinese families get together for a Spring Festival Eve Dinner called “tuanyuan fan” to celebrate, this dinner is perceived as the most important get-together meal of the entire year.

According to the Chinese 12-year animal zodiac cycle, the Chinese year beginning in 2018 is the year of the Dog. (source) February 16 marks the first day of Chinese New Year, and it is also the beginning of the weeklong celebration of the Lunar New Year. Many other countries like Singapore, Hong Kong, Taiwan, Indonesia, Malaysia, Thailand and some other Southeast Asian countries observe this day/these days as a holiday as well.

This holiday is usually observed on the 15th day of the Chinese Lunar year – that’s specifically March 2, 2018. Lantern Festival marks the final day of the traditional Chinese New Year festivities. Lighting of lanterns is a Chinese tradition that started over 2000 years ago; the said tradition symbolizes reunion of family and wishes for a bright future.

It’s a holiday observed on March 8, 2018. As the name suggests, it commemorates the movement for women’s rights. Over the years, this holiday has become an occasion where men get to express their love to women just like Valentine’s Day. Also, this is a day when many shops, especially e-commerce, put their products on sale, making the holiday almost like a shopping festival for women.

Arbor Day in China is a holiday wherein individuals, mostly students and political groups, are encouraged to plant trees. The date typically changes every year, it most often set on a day when the climate is good for a planting season. For 2018, it will be on March 12.

Also known as the Blue Dragon Festival celebrated on the 1st day of the 2nd lunar month, which is March 18, 2018. Zhonghe Festival is a holiday observed especially by Chinese farmers who superstitiously believe that it could bring them favorable rainfall and a good harvest.

Youth Day is a national holiday of political nature. It is associated with an important historic event in the development of Chinese democracy. It was May 4, 1919, when young people began mass demonstrations that became a kind of trigger to start the national liberation movement in China. (source)

Just like many other countries, China also celebrates International Labor Day on the first day of May. It’s a holiday to celebrate every worker’s contribution to the country.

A holiday celebrated on June 1 since 1949. As the name suggests, it’s a fun holiday that pays tribute to all children. During this day, primary schools cancel all classes and allow children to have fun instead, families eat out together, and most amusement parks’ tickets are either free or on sale.

A traditional holiday observed on 5th day of the 5th lunar month. This day commemorates the death of a Chinese poet Qu Yuan who took his own life by drowning in a river due to total despair at his country’s downfall. People tried saving Qu Yuan by rowing their boats as fast as they could, but to no avail. Dragon Boat racing was said to originate from this scenario. It is one of the sports held during the holiday.

CPC stands for Communist Party of China, which was founded in 1921. The CPC is the world’s largest political party and played a vital role in China’s development, hence July 1 is a holiday to celebrate the day the CPC was founded.

A holiday set on July 11, 2018, to commemorate the voyages of a mariner named Zheng He who travelled around Southeast Asia and West Africa to show China’s might to the rest of the world. This is also a day that pays tribute to seafarers’ contributions to regional trade and diplomacy.

Army Day is the Anniversary of the Founding of the Chinese People’s Liberation Army in China that is celebrated on August 1, 2018. It’s a day to pay tribute to all of China’s armed forces.

It’s a traditional Buddhist and Taoist festival that is usually held on 15th night of the seventh month on the Lunar calendar. It’s a festival wherein Chinese show respect to the roaming spirits of their ancestors by offering them food and lighting candles and incenses.

The 7th day of the 7th Lunar month is a day to celebrate Valentine’s Day in China. For 2018, it will be on August 17. Chinese Valentine’s Day is also known as Young Girl’s Festival – a festival inspired by a beautiful folk legend about Niu Lang and Zhi Nu who showed great love for each other.

Teachers Day is a day to pay tribute to all teachers and coaches in China. The main purpose of the holiday is to show the prestige and importance of the teaching profession. During this day, children/students give various gifts and flowers to their teachers.

A festival celebrated on the 15th day of the 8th month on the Lunar calendar – a day where the moon is at its roundest and brightest. Eating mooncakes is one of the most popular traditions observed during this holiday.

National Day is a holiday to celebrate the founding of the People’s Republic of China. It’s a weeklong celebration wherein Chinese enjoy family time, set off fireworks, and hold a huge military parade at Tiananmen Square.

A festival also known as Senior’s Day, celebrated on the ninth day of the ninth month on the Lunar calendar. It’s a day to honor the elderly. During this holiday, eating Chongyang Cakes and drinking Chrysanthemum Wine are the most popular customs.

A usual working holiday wherein journalists are given recognition. The history of Journalists’ Day in China begins in 1934. It was celebrated on September 1 to commemorate a reporter who was prosecuted for writing an investigative report criticizing local government. (Source)

Much of the world celebrates Christmas Day on December 25. Meanwhile, in China, it’s not even an official holiday. Nevertheless, due to Western influence, most Chinese get to experience the Christmas spirit because of the Christmas decorations found in malls, restaurants, and even banks. 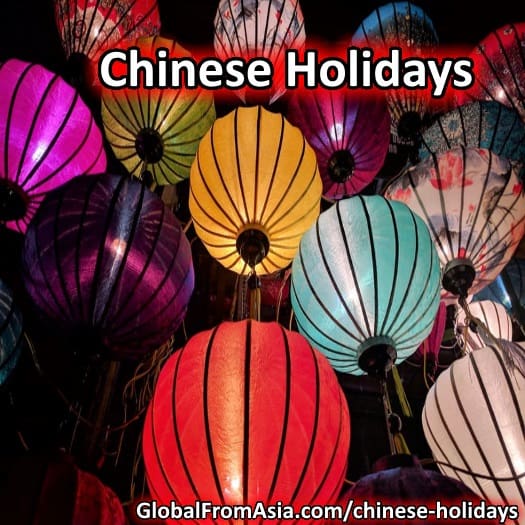 Building A New Country in French Polynesia with Marc Collins

How to Get An E-Estonia Residency Card

USA Electronics Cheaper Than in China, Ya, What?!