I have had many American listeners and readers ask about the changes (or let’s call it full-on enforcement) of FATCA and if they should still consider opening a company in Hong Kong or anywhere outside of the USA. These conversations have happened over beers with Americans doing business in China for decades, saying that now they are considering moving everything back to the USA.

While it hasn’t gotten harder to open a company in Hong Kong or other places in the world (as far as I know), the real challenge for Americans now is getting approved for bank accounts as directors of those offshore companies. Today I will go through a few reasons for the difficulties to stimulate your thinking. Maybe the United States IRS is reading this. Well, maybe not – I am using my real name on this blog and I am always advised to keep my mouth shut about things like this.

But I am writing this for things that are bigger than me. I am nervous for the future of Americans doing business internationally.

FBAR, FATCA and the US Government’s Stance on Americans Overseas

The big ones are FATCA and FBAR, which require all US citizens globally to report to the US IRS the bank accounts that they have anywhere in the world. And just last year, the IRS started requiring banks around the world to check for US citizens who have accounts with them and report back to the US with the details of these people. Also last year, they made an online portal for us to report these overseas accounts. I did it, and boy, it was scary – looking at the website’s homepage – it is looks like I am guilty of a crime for having an overseas account.

Requiring banks around the world to report to the US government about Americans with overseas accounts has created a paperwork overload and new workflows and requirements to change certain other workflows.

I am aware Apple has tons of cash overseas that it isn’t bringing back to America in order to save on taxes, as well as a ton of other major companies. Is that who the US government is targeting? Or is it the rich people who are setting up overseas shell companies to park their cash and hide it from the government? I really hope they aren’t targeting us small businesses run by Americans overseas trying to build an international business.

I believe I am doing a good job as an American overseas. I am representing the American people here in Hong Kong, China, and other parts of Asia as best I can (though some friends back home say they worry how my sometimes awkward jokes may not be well received, haha!). Most Americans are back home, behind the borders of US customs, unaware of what is happening in the “big bad world” and losing to the expanding global business market.

I wonder if the US government was thinking about these consequences – or is this the intention – to make all Americans “give up” on international business and just go back to our home and do business there? That seems so insular, and many Americans are already in their own “bubble,” and if this turns out to be the intention, I am sad to be an American now.

My mom cries every once in a while when I talk to her on the phone – she misses me, and I miss her. Since the first time I announced to her that I was moving to China she cried and said, “America can’t give you opportunity?” And definitely when I moved to China in 2007, it wasn’t to avoid taxes. I am in China to build a bridge, to understand the market and business environment here, to build a business and help others tap into this massive, and rather untamed market. It is a headache and I have had my ups and downs.

Maybe the US government should give people like me a grant for coming here to build my business – maybe to bring other Americans here and work with me. China is supportive of its entrepreneurs and also wants to expand to the US market to compete with those who were once its customers (big brands that it manufactures products for).

But instead of supporting people like me in China, I have greater burden and pressure from the US government. It doesn’t make sense to me. I’m afraid one day I’ll go back to America and get handcuffed at the border like a criminal. I’m just trying to build a sustainable business here, as a legitimate American citizen, the same as a bunch of other Americans here. Why do you want to make it harder on us, when we’re already fighting against the odds?

This is a sensitive subject, but I hear it more and more in circles of American expats. And really, it is with many who were immigrants to America – now regretting they went through the process to become a US citizen. It’s a depressing discussion for me to hear, and it makes me sick to think of it, but it comes up more often now. Then there are the Europeans, who I hear saying they are so thankful that their ancestors / grandparents didn’t move to America, or that they didn’t change their citizenship when they went to America.

It is sickening to think about, and, sadly, the US government has responded by increasing the fees to renounce citizenship – probably because the demand has picked up and the amount of paperwork to do it has increased, so they have to have more full-time government employees to work with it.

Being an American Now Is a Disadvantage When Structuring New Companies

Other scary conversations I hear is how Australians, Europeans, etc. do not want to have Americans in their corporate structure (i.e. shareholders) due to these new policies and the risks and unknowns of the future. How horrible is that? I’m a US citizen, and maybe I could be offered some new deals and opportunities, but behind closed doors the Australians are discussing something like:

“Oh, Mike Michelini, yeah he is a smart and hard-working guy, but we can’t ask him to be a partner in our new business because he’s an American and there are all these new regulations for them. It could jeopardize our bank account being opened, or maybe in the future there may be an investigation from the US government and they’ll see an American on there and we get penalized. Let’s just offer him a consulting or employee position.”

Maybe this discussion is happening, not for me, but for other American businessmen reading this. You think I am whining; this is a fact. Whether I complain about it or not, I have specifically heard non-Americans “whispering” this with me in casual conversations at coffee shops. Having an American in your international business is now a disadvantage and a liability.

Who would have thought this would ever happen?

Banks Are Making Everyone Prove They Are 100% Not American

In certain banks, they are making you PROVE you are not an American citizen when you apply. Isn’t that insane? Those who give a passport from the European Union, may be dual citizens with a US passport too. They have to prove or at least swear they are not at all American and not required to follow these new US government regulations.

In my podcast, I have asked some of the agencies if they can help Americans open bank accounts, and they have responded that currently, unless that American has a very good business plan and reason to be offshore (their business needs to have an international business element, relevant to Asia), they cannot help. They don’t even want me to link their business to this article to send clients their way!

This is scary for me; I feel like some kind of criminal, or like I have a disease! Is this the new “American disease”?

If HSBC Hong Kong Declines You, You Need to Wait 3 Months to Reapply

I have had a few clients and friends over the past couple months get declined by HSBC Hong Kong. I always refer to HSBC as the easiest to use English online banking, multi-currency account in Hong Kong. I have made some contacts there over the years, and they have told me that they are closing a lot of accounts, not only denying new accounts. I couldn’t get specifics, but basically it now won’t be as easy to approve smaller businesses; the bank feels the paperwork and hassle isn’t worth it. 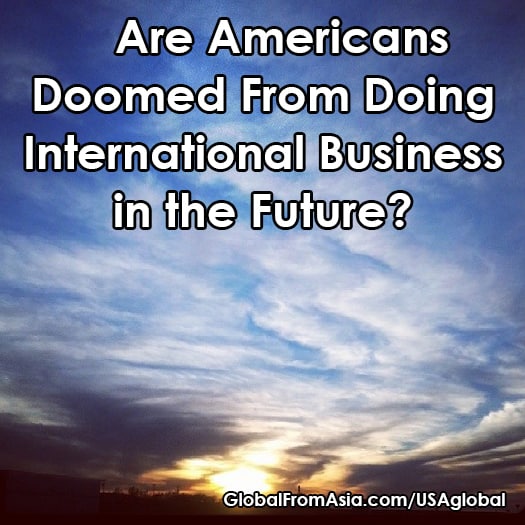 And it’s not only affecting Americans here; there have been crackdowns on banks to ensure their clients are doing legitimate business. But how can the bank ensure this is the case? Sure, there may be some chance they can see it – but in order for the bank to do this with 100% accuracy, it will have to slow down how all of us do business.

I Am Not Giving Up on Being an American Overseas

Though I am a bit negative and nervous writing today’s post, I still want to be an American doing business in China/Asia. And I want to keep my real name when I post blogs online; I don’t want to start a new blog under a fake name and bash America. I am proud to be an American, and even though I don’t live there, I appreciate my education, my upbringing, and my friends.

I really hope I don’t convert into some “radical” blogger bashing America – I like to be transparent on who I am and the business I do. What I really hope is that the US government reads this post (or the tons of others on the internet) and realizes what a negative affect it is having on its citizens abroad.

Or do you want to banish me from doing international business? This blog is hosted on a US server (HostGator) – maybe I will get a letter from my host or domain registrar that the US government is seizing my site. Sounds more like a Chinese government thing to me, but who knows what the US government might do now.

I’d love to hear your comments below…

7 Comments on “Are Americans Doomed to Be Disadvantaged Doing Business Overseas?”