Wondering if Didi can become the next super app in China?

In my own opinion, YES, Didi Chuxing (Didi) can become the next WeChat-like Super App.

What is a Super App?

A Super App has a huge user base and a dominating market share, a high usage frequency, and is the entry portal for many other service offerings.

Let us talk about why I feel this way:

Didi – A Clear Winner In China With A Huge Customer Base

According to KPCB report, China accounts for ~70% of global on-demand trips. After the acquisition of Uber China, Didi now would have +90% China market share and +350 million users by iResearch. Didi is the largest player in the world by the number of trips and the number of customers. They have probably already achieved critical mass and economy of scale. Didi can reduce marketing expenses, driver subsidies, passenger subsidies, and become profitable in some markets. Also with this scale, Didi can pick the battleground and crush local competitors. They can choose a regional market, then subsidize target market with profitable ones.

Didi Can Easily Expand Into Other Related Services

Uber global data shows that an active user, in average, would open the app 4.5 times/week. Due to lower car ownership and an insufficient public transportation infrastructure, Didi’s number is probably higher. Most Tier 1 and Tier 2 cities in China have high population densities. Buses and subways are packed during rush hours, plus there are not enough roads to support the number of cars in cities. Congestions are common in those cities yet, they are having a hard time to further expand public transportation infrastructure. The government wants to increase transportation efficiency rather than car ownership. They do so by limiting private car license using auctions (Shanghai) and lotteries (Beijing). Sometimes, the cost of a license is higher than the cost of the car itself. Didi’s (and Uber’s) carpool service is one of the answers to this problem. At the end of July 2016, the Chinese government issued a new regulatory policy allowing ride-sharing in China. There is a huge growth potential for Didi’s customer usage frequency.

Didi has expanded from taxi hailing to include private ride sharing, bus/shuttle services, test driving, and driver hiring. I would not be surprised to see auto insurance, car rental, as well as short vacation package offerings in the future. Uber had also tested UberEATS, parcel deliveries, music for the journey, and book club ideas. The relatively exclusive passenger time (and attention) during commute could provide a huge business engagement / entertainment opportunity. As long as the user base remains active, opportunities are endless.

MY PREDICTION: We are likely to see this happening in the next 1-2 years.

Thank you for reading. 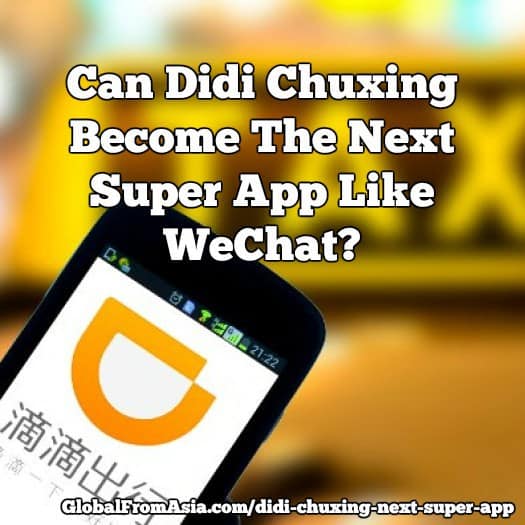 This article was originally published on LinkedIn by Mr. Xing Gao.

Is It Still Safe To Do Business in/with Hong Kong? (Plus Mike’s Journey)

Choosing a Product Category For Your Import, Export Business in China with Deepak Madnani

2 Comments on “Can Didi Chuxing Become The Next Super App Like WeChat?”