One of the perks (if you call it that) of blogging and being ears to the ground on Hong Kong and China business is the feedback you get on the banking situation. And it has been juicy in December!

The last couple weeks many Chinese e-commerce sellers have been having cash flow problems. As we have discussed on this blog quite a bit, Chinese companies often leverage a Hong Kong business and bank account for their trading. They do this for the multiple currency options as well as the general ease of doing business.

But another reason is, as many of your know, the lower tax rate in Hong Kong.

Now, this is stuff you don’t hear the reasons behind, so today we will share some stories and make some speculations.

This is a scary one – there are quite a few logistics companies and Chinese service providers who can help businesses exchange RMB and USD. They would be considered a bit “gray” channel, as the correct way to transfer money in and out of China is via bank transfer to a Chinese business bank account. A lot of these service providers take care of that for you – and you pay them outside of China.

This has been a common practice for many export B2C sellers who get paid overseas in US dollars and then need to convert that into Chinese yuan (RMB) to pay their costs of operations and goods in China.

Having dinner with a few people close in the industry have been losing touch with their service providers for this case. Or the hoops to do this have gone up. One friend said his currency exchange service provider now wants to do the deals in person, and in cash! They are getting super paranoid to do it online.

Word on the street is that there is a massive crackdown on the Chinese side to get rid of these underground money exchange channels.

Limiting The Amount of Personal Bank Accounts in China

Effective December 1, 2016, Chinese banks changed a lot of their policies. I don’t follow it too closely, but in various Wechat groups I have been hearing people having trouble getting personal bank accounts in Mainland China open now.

Whenever there are these big policy changes, people get nervous. Not just people, but also banks and other businesses. The policy is not totally clear, and lots of exceptions come up challenging the new policy.

So while it is hard to tell exactly how this will pan out (only been a couple weeks as of writing this) – I would have to say this is tied to the crackdown of limiting underground money transfer in and out of China.

And to add more angles to this story, my business partner Ray Ng has been telling me a lot of Mainland Chinese clients are looking for help getting a new Hong Kong bank. That their current HK bank has been closed and they don’t know how to send and receive money.

This isn’t just from the sellers themselves, but also alternate money transfer businesses who help with Amazon FBA receiving and sending.

At a recent meetup in Shenzhen, China over the weekend, one participant told me that if I can solve the HK bank crackdown to Chinese e commerce export sellers, I will be rolling in the dough. That they are really desperate for options right now and searching far and wide the past couple weeks.

This calls for a separate blog post later – but worth bringing up here. I’ve read a bit in Wechat groups about Western entrepreneurs getting their Amazon FBA account shut down due to logging in from a Chinese IP. The notice says that because they are logging in from China often, Amazon needs to see a proper work permit from the Chinese government.

Very strange, and only hearing about this on a small scale for right now. But what does this mean? As the growth of digital nomads skyrockets, will everyone need to get work permits in the country they are currently traveling in?

Or, is this a China government specific request? Are they now pushing Amazon and other platforms to enforce sellers in China (located in China, using a Chinese IP, etc) to prove they are properly registered and paying Chinese tax. Very interesting indeed. Scary, but fascinating.

Reasons Why This Is Happening?

So why is this happening? What has changed in the business environment that could make such a wide ranging change. Let’s speculate a few options here.

Massive Decline in RMB to USD The Past Month

Beijing is looking at the currency closely. The RMB has moved from 6.74 to 6.95 in the past two months!

Chart of RMB to USD past 60 days

So this is making things in China a lot cheaper to buy, while making it much more expensive for Chinese to buy things abroad. And it is bucking the trend from a decade or more of the Chinese Yuan currency growing against the dollar.

Could this be tied to the new US President that is coming in January? Could currency traders and governments be making big bets based on the international trade situation?

A lot of Chinese manufacturers and export based business owners I have been discussing have also been re-evaluating their strategy and trying to guess what President Donald Trump could do for us. We blogged about some speculations here 999, but again, no one really knows what Trump can do. And even if he wants to do some of the extreme things he says, he would also need to have the rest of the government systems in place agree and pass.

Maybe the Chinese government is preparing for a Trump US President world as soon as possible and not taking any chances for a “wait and see” on January 20, 2017.

Others have said maybe it is the Chinese government learning from USA’s FATCA. The Chinese government also has worldwide tax on Chinese citizens. They have not been too stringent on keeping tabs on it. Maybe this is the first step towards tightening their enforcement on claiming income tax from their own citizens as well as foreigners living in the country.

The new government has been steadily working towards improving the business environment in China. Xi Xiping 999(need to check his name and how to call him) has been showing this with stricter internet filtering, cleaning up of corrupt government officials in local provinces, and just country-wide small tweaks and changes that show there is no room for “funny business” in the system anymore.

Claiming more income tax, and making sure all business owners leveraging the Chinese economy to earn a living pay their share of taxes would be a qualification of “cleaning up”. Whether you are sitting there reading this today pouting or not, you need to keep up with the changing times.

Thoughts On These Banking Issues?

I’d love to hear from you about these tightening banking issues mean. As more people travel around the world, and can work from any Starbucks with an internet connection, governments around the world seem to be working harder at claiming “their fair share” of the pie.

From all the points I bring up above, I truly believe the banking issues are due to the central Chinese government making new policies to claim more tax. They are noticing more and more of their Chinese companies registering abroad (Hong Kong, etc) and not seeing this tax revenue come back. Then the money that does come back in goes through underground channels in personal bank accounts. These times are going away quick, and as a business owner, please take note.

Let’s all share ideas and help each other keep on top of this by sharing a comment below! Best of luck in your international business endeavors! 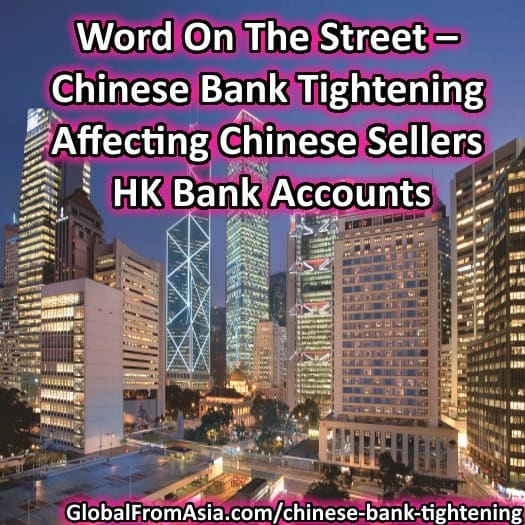 Some Updates and Future Developments for Global From Asia

How to Get a Chinese Visa

How Do Taxes Work In Hong Kong?