Citizenship is a status or an identification of a person recognized upon birth – either based on the place of birth, based on the parents’ nationality or both. Either way, being a citizen entails specific rights such as to express oneself, to vote in elections, to choose a religion, and so on and so forth. Now that the society has grown into more global, more connected and more integrated, dual citizenship has become a necessity for some and it has become widely accepted in many countries. Basically, getting another citizenship poses many benefits yet presents additional obligations as well. People who usually pursue another citizenship are either: someone who comes from the affluent society, someone who was born to parents of two different nationalities, someone who has a fairly large amount of money to burn, someone who just want to travel the world, or someone who just want a better quality of life. In actuality, there are many reasons why people obtain another citizenship, for one, to secure a second home or a safe haven to run into in case of troubled times.

However, getting a citizenship is not easy for everybody. To tell you the truth, getting a second citizenship may take years, a large amount of money, and enough resources. Nevertheless, don’t be discouraged, as this article is titled “Easiest Countries to Get Citizenship”, apparently, there are easier or maybe faster ways to get a dual citizenship – it may not really be the “easiest” as easy as pie, but easier compared to other countries.

Dominating Religion: 80% of the population is Roman Catholic

The Commonwealth of Dominica is a country located in the Caribbean region that currently has parliamentary democracy. It offers the cheapest Citizenship by Investment in the world. For $100,000 contribution to the Economic Diversification Fund or purchase of authorized property valued at least $200,000 you can be a citizen in Dominica. Citizenship also extends to your family, including the spouse, children, dependent parents and grandparents. Dominica doesn’t require you or your family to reside in Dominica in order to obtain citizenship.

To apply for citizenship, you must first choose an authorized agent listed on the official website of Citizenship by Investment Unit (CBIU). The agent will provide you assistance all throughout the process. You will be asked to complete and submit certain official forms, go through medical examination, and obtain certain supporting documents such as Sales and Purchase Agreement, Birth certificate, passport copies, 12 months bank statements, Notarised affidavit of source of funds, etc. The application will then go through verification. Your authorized agent shall inform you whether your application has been granted or denied. If the application got approved, you will then proceed on making the payment either for the Economic Diversification Fund or for the purchase of the real estate property. Upon completion of payment, CBIU will issue your certificate of registration – this certificate stands as the evidence of your new citizenship and can be presented to apply for a Dominican Passport.

Brazil is known for many things; its culture and tradition, tourist destinations, world cup wins and soccer stars and a lot more. It’s located in South America and it’s so big that it actually cover almost 50% of the continent. It has over 208 million population and was listed as the 5th most populous countries this year.

Dual Citizenship is widely accepted in Brazil, foreigners who wish to be a citizen in the country don’t have to renounce their primary citizenship.

Application for citizenship is run by the country’s Ministry of Justice. To apply, you must first submit your application along with your whole series of required documents for naturalization with the local agency of the Department of Federal Police. Requirements depend on which category your case belongs, but generally it includes test of proficiency in the Portuguese, birth certificate, marriage certificate, passport copies, police clearance/document to prove that you have no criminal record, 3×4 photographs, and application form. Once all the required documents and application forms are submitted, your application shall be processed within 60 days or more.

Canada is a North American country known for many things including for its famous Maple Syrup, breathtaking sceneries, high quality of life and its nice and friendly people. Many people claim that Canada is a good place to live in or a country to retire in. To apply for citizenship, you must meet the following requirements:

To apply, you must fill out necessary application forms, pay application fees, and submit your application to Case Processing Centre. Processing time can take up to 12 months or longer depending on your case. If you were born in Canada, or one of your parents is Canadian, you may already be a citizen, and you’ll only need to get proof of citizenship. The other easiest and fastest way to get Canadian citizenship is by getting sponsored by a family member or a Canadian spouse.

Cypriot citizenship can be obtained easily if one of your parents is a Cyprus citizen or if you are married to a citizen of Cyprus. Otherwise, the fastest way to get a Cypriot citizenship is through Citizenship by Investment Programme – only if you have €2 million euros to invest in real estate/ land development and infrastructure projects/ financial assets of Cypriot companies or Cypriot organizations / alternative Investment Funds or financial assets of Cypriot companies.

Application is filed with the Civil Registry and Migration Department, the District Administration Offices and the diplomatic missions of the Republic of Cyprus (embassies and consulates)

St. Kitts and Nevis is a country that belongs to North America and an island country in the West Indies. In World Atlas, St Kitts and Nevis ranked 8th among the World’s 50 Smallest Countries. Its population majorly consists of African descent and the official language is English.

St Kitts and Nevis is one of the countries that offer a cheaper Citizenship by Investment Programme. Foreign individuals may qualify for citizenship by contributing US$150,000 to the Sustainable Growth Fund (SGF) or by investing at least $200,000 in real estate.

The application process works almost the same as it is in Dominica. First, the application can only be filed by registered Authorized Agents. In behalf of you, your authorized agent shall submit your requirements including the application forms and required documents at the Citizenship -by-Investment Unit. Processing can be done in as fast as 60 days.

Ireland is a European country that is alongside United Kingdom. Ireland ranks above the average quality of life – in fact, Dublin – the capital of Ireland, was dubbed as best city to live in the UK and Ireland for its stable political environment, lower levels of air pollution and a strong sociocultural environment.

To apply, download the appropriate form here. Each form contains the list of requirements you will need to submit, including your original passport, marriage affidavit, birth certificate, passport photographs and 3 different proofs of residence. Submit your requirements and duly signed application form to The Irish Naturalization and Immigration Service (INIS) for verification and approval. Each application is approved by the Minister for Justice and Equality. Typically, the process can take up to 6 months.

Colombia is a South American country alongside Venezuela and Ecuador. It is known for its tropical landscapes and their primary agricultural products like coffee, cocoa beans and tobacco.

Basically, you will have to spend at least 5 years in Colombia in order to get citizenship, but this can be reduced to 2 years if you are married to a Colombian citizen, or if you have a Colombian child. On the other hand, if you are a Latin American or a Caribbean national, it can only take a year of residence to get a citizenship. Moreover, Colombia also offers citizenship by investment for approximately $150,000 – through this you can get a 5-year permanent residency in the country, after that 5 years, you and your family may apply for naturalization.

To apply, you will have to send a letter to Ministerio de Relaciones Exteriores indicating your intent to have Colombian citizenship. The letter must contain your name, birthday, country, contact details, nationality, and your reason/s why you want a citizenship. Along with the letter, you will submit a copy of your ID, 4 passport photos, copy of valid residence visa, marriage certificate if applicable, proof of employment, birth certificate, your parents’ Colombian ID (if applicable), and a copy of the main data page of your passport.

Macedonia is another European country located next to Greece and Albania. It’s a small country that maintains a rich culture and known for its numerous mountains and mountain peaks. Macedonia is the home of Mother Theresa of Calcutta and Alexander the Great.

The request for the citizenship acquisition must be submitted to the Ministry of the Interior.

Paraguay is a South American country that is next to Brazil, Argentina and Bolivia. Paraguay recognizes dual citizenship – in fact, getting a citizenship in Paraguay is most likely the most straightforward and inexpensive. For as little as $5000 deposit to a Paraguayan bank or investment to real estate, you can obtain a permanent residence. After 3 years as a permanent resident of the Paraguay, you may apply for naturalization.

To apply, you will need to submit a copy of your passport, birth certificate, proof of address, police clearance issued from your country and from Paraguay, marriage certificate if applicable, medical certificate, a bank reference letter, and a certificate of life and residence permit issued in Paraguay. These documents shall be submitted to the General Migration Directorate for review and approval. The process can take as fast as 90 days.

Finland accepts multiple citizenship and grants citizenship to individuals born out of wedlock if his or her father is a Finnish citizen, adopted child aged between 12 – 17, citizens of Denmark, Iceland, Norway, and Sweden and young persons aged between 18 to 22 years old. If you are married to a Finnish citizen, you may apply for a residence permit and live in the country for at least 5 years and apply for naturalization.

To apply, you may submit an application that suits your situation to e-service Enter Finland and then visit a service point of the Finnish Immigration Service to submit the required documents and prove your identity. An email or a text message shall be sent to you when a decision has been made.

There you have it, 10 countries where it’s easier to get a citizenship. Note that this is just a brief guide to get another citizenship, the process can be a lot more complicated. If you really are determined to get another dual nationality, I suggest you choose the best country you think is best and then do an extensive research about it – hire a lawyer or call the consular if you may. After all, I personally thing getting a dual citizenship can be worthwhile. Best of luck! 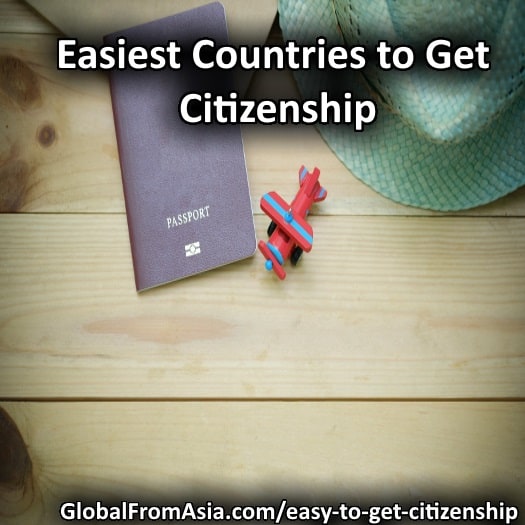 Are Americans Doomed to Be Disadvantaged Doing Business Overseas?

Announcement: Launching a Live Talk Show for Global From Asia