As the e-commerce industry has continued to mature, China and the USA both have developed into the largest contributors to e-commerce. For this reason, ePacket was launched in 2011. ePacket shipping is an agreement made between China Post and the US Postal Service that aims to increase international e-commerce sales for China. ePacket is an international courier service that enables sellers to ship items globally for a relatively cheap shipping fee, and for a shortened delivery time. ePackets, as the name suggests, are small packages weighing not more than 4.4 pounds with tracking and delivery confirmation features.

The goal of ePacket is primarily to boost global trade between the US and China. ePacket was a solution agreed upon between the USPS and China Post. It was called “ePacket” because the package must be lightweight and the name also implies that the concept was specifically designed for e-commerce.

In May 2010, the USPS entered into an international tri-lateral agreement in Shanghai with eBay Greater China & Southeast Asia (eBay GC) and China Post Express & Logistics Corporation. The agreement created a new, simplified shipping platform for international tracking and delivery of lightweight goods ordered by consumers in the US from eBay sellers in China. (source (broken link http://about.usps.com/news/national-releases/2010 ) )

In 2011, it officially came into effect. eBay was a pioneer in offering ePacket as its shipping option, and the impact was indeed sweeping. It was such an advantage for eBay’s Chinese merchants that it nearly tripled eBay’s sales to the US. Over the years, ePacket has expanded to other countries such as Australia, Canada, South Korea, and the UK.

How Can ePacket Shipping Help My E-commerce Business?

Lots of dropshippers source their products from China and ePacket is certainly heaven-sent for this business. ebay, AliExpress, and Oberlo are the popular websites for dropshipping with the ePacket shipping option.

2. What are the requirements for ePacket delivery?

3. How many days does ePacket delivery take?

A delivery usually takes 7 to 39 days, depending on the location.

4. How can I track an ePacket shipment?

The supplier should provide you with an ePacket tracking number or code which you can check on the USPS and China Post websites.

5. How to ship with ePacket from China?

If you’re in China and want to ship an ePacket to the US, you can drop off an item at any ePacket office in China provided that you already have an account with China Post. Otherwise, you can register from their web portal. Alternatively, you may try logistics service providers such as EMS, which offers online order processing & shipment pick-up/drop-off. 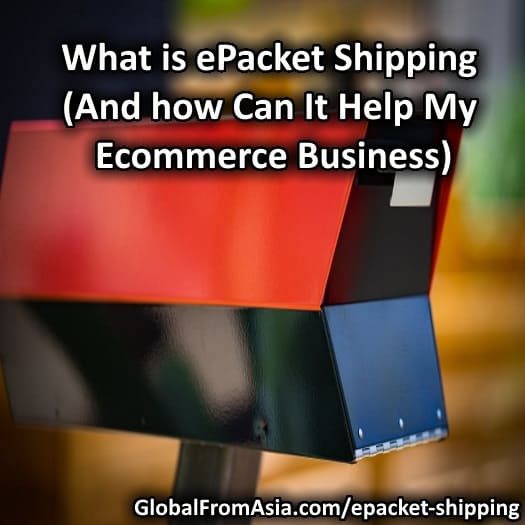 Leverage Shenzhen As Your Base During Trade Show Season (For Canton Fair, Global Sources, & More!)