Moving cross country for business and investments is nothing new.  It’s one way of taking your business global especially if you are positioning yourself in a strategic location.  One of the countries often mentioned is Mexico. But before you rush to pack your bags and move to Mexico, you have to be able to answer why Mexico.

Mexico is a federal republic found in the continent of North America. Geographically, Mexico is composed of 31 states and located just beside the United States of America, Guatemala, and Belize. As of 2018, it has over 130 million population, where the majority belongs to Catholic religion. Its official language is Spanish and it has a mild and pleasant weather almost all year round.

When I hear the word Mexico, the first thing that pops up in my head are basically tacos and burritos. Funny it may sound but I know many can relate. Mexican food is pretty well-known all over the world. In addition to Mexican cuisine, Mexico is known for its rich culture, tequilas, folk art traditions, stunning beaches and vibrant music genres.

Reasons why you should move to Mexico 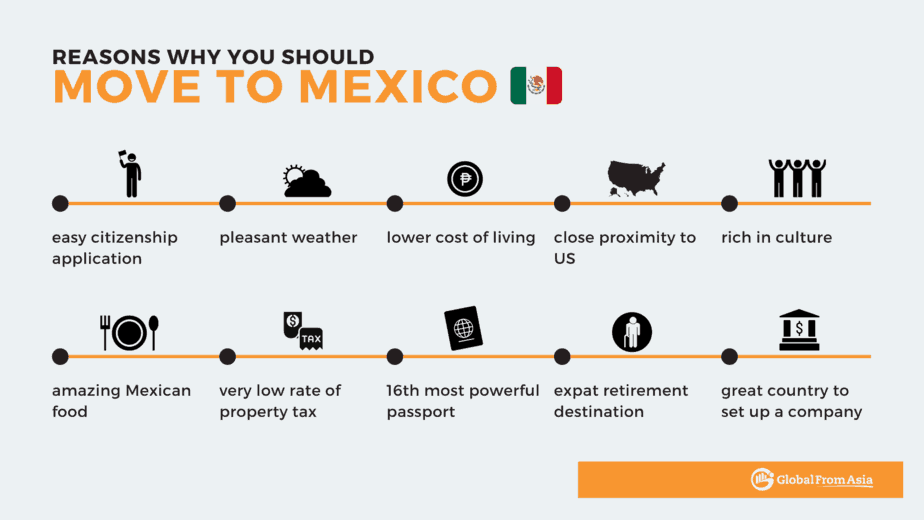 How to get a Mexican Citizenship

There are 3 ways to acquire Mexican citizenship: by birth, by naturalization and by marriage.

Naturalization is a legal process by which a non-citizen of Mexico acquires or applies for a Mexican citizenship. Naturalization gives several benefits to foreigners, including the right to vote in Mexican elections, easily apply for jobs, the right to stay in the country without renewing any visa and be able to get a Mexican passport. To be naturalized, there are certain requirements you need to meet, one is to live in Mexico for at least 5 consecutive years before applying for naturalization. You could apply for a permanent visa in Mexico to be able to legally stay in the country for a long term basis.

Eligibility:
You are qualified for a permanent residency visa if you can comply with the following requirements:


Application for Mexican citizenship through naturalization is generally handled by the Secretary of Foreign Affairs (SRE). Once approved, you shall take the oath of sol nationality to Mexico and be officially naturalized.

Applicant must present these requirements to the Secretariat of Foreign Affairs; processing time can take 4 to 6 months.

Getting a Mexican citizenship is basically best for people who wish to do business in the US and Americans who wish to enjoy a lower cost of living yet being able to stay close to their families in the US. Apparently, its proximity to the US is probably the main reason why numerous Americans move to Mexico.

Mexico has indeed a lot to offer – good quality of life, lower cost of living and good healthcare. If you think Mexico could be your second home or feel that it could be a great retirement locale, you may want to consult or seek legal advice first from an immigration lawyer to get started.

If you have some experience or thoughts to share about getting a Mexican citizenship please feel free to comment below! 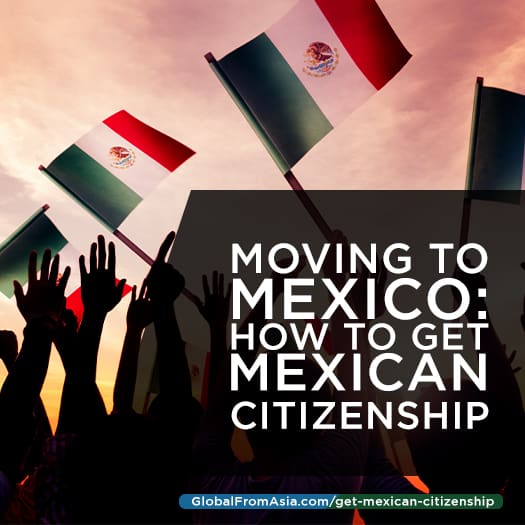 Easiest Countries to Get Citizenship

Hong Kong Tourist & Travel Destinations when on Business with SamTheLocal

Why You Should Invest in Vietnam

The Story Of How We Become Expats with Mikkel Thorup

You Ready? Preparing for A China Trade Show (Tips to Maximize Your Trip)