The start of the year 2020 did not seem to be all promising.  January was filled with news of conflicts, disasters, calamities and death.  These unfortunate events, some at catastrophic levels, sprawled globally. US, Middle East, Australia, Asia, Europe and other parts of the world found themselves facing these battles head-on.

While some of these unfortunate events were on the news for a short period.  Some are still developing and progressing as of this writing. And, one event that is being experienced globally is the spread of the 2019 Novel Coronavirus (2019 nCoV).  Its epicenter was the economic powerhouse and major transportation hub of Central China – Wuhan. Since the news of its outbreak shattered around the globe in the last week of January, the virus spreads domestic and international problems.  There were reported cases in other countries spanning the Southeast Asian region, the US, Canada, Australia, Germany, France, UK and others.

Everyone was on their toes when the World Health Organization declared a Global Health Emergency following the thousands of confirmed cases and hundreds of deaths from 2019 nCoV.  The epidemic wave put pressure on health ministries all over the world to try to protect their countries from catching the wave.  And while the efforts are funneled to the clinical solutions to battle this epidemic, another aspect that needs equal attention is its impact on the global economy.

What is a Global Health Emergency?

In the case of the 2019 nCoV, the declaration was made not because of what was progressing in China – where all of its regions have confirmed cases of infection from the virus.  It was more because of what was going on outside of China, caused by the outbreak.

This was also the case with various virus outbreaks in the past such as SARS, MERS-Cov, Ebola and others.  While it would seem to be confined to infectious diseases, a global health emergency can also be declared in the event of chemical agent or nuclear material emergencies.

Simply put, a global health emergency is a global concern.  All countries must be prepared for the worst – medically and economically.

The Aftermath of the Declaration

The declaration had somehow fueled fear as to the extent of the outbreak.  About a week prior to the WHO declaration, China, particularly in Wuhan, already implemented a lockdown.  All public transports are cancelled – flights, trains and buses. All access in and out of the city are blocked.  The whole of Wuhan is under quarantine. The day after, China expanded the lockdown to other cities in a struggle to contain the virus.  People are firmly urged to stay indoors and getting out when necessary is highly regulated.

This alone shows what a health emergency declaration can trigger – travel restrictions and consequently, trade restrictions.  In Wuhan, being the epicenter of the virus adversely affected its being the economic center of Central China. As access to and out of the major transportation hub is blocked, the economic ripples also were blocked.

This was the case for the other countries right after the declaration.  Despite WHO’s statement that travel bans and other drastic measures are not necessary, governments and airline companies implemented travel bans to and from mainland China.

This did not only hurt China’s economy – known as the second in power, it also has some adverse effects to the economy of other countries.

The very first trigger that WHO feared the declaration of a global health emergency could cause is the countries’ imposition of travel restrictions.  And, indeed, restrictions were imposed – airlines cancelled thousands of flights; adjacent countries to China were blocking borders; ferries and railways were also blocked.

These restrictions, as a consequence, come with a financial impact on these travel companies and the travel sector as a whole – standing to lose billions until the ban is lifted.

The China Travel Guide reported that there are over 140 million inbound trips to China, over 130 million outbound trips and 5.5 billion domestic trips.  Attached to these trips are billions of revenues – potentially gone until the virus is cleared and eradicated.

Impact on Global Manufacturing and Supply-Chain

The spread of the coronavirus and the lockdown on China also meant the shutdown of factories.  This was a major concern of entrepreneurs from the world over that sources its products from China.

Not only are entrepreneurs from other countries restricted from visiting mainland China for their products, the factory workers’ shifts will be highly regulated and thus, a slowdown in production is expected.  This remains yet to be seen as the new year holiday was extended. It also is not certain yet if the factory workers can already return to work when they are under quarantine.

Some workers too may have been infected while others may not feel fit to work with the pent-up fear of getting infected if they go outdoors.

With fewer factories operating in fewer shifts, production is seen to drop.  Entrepreneurs will be forced then to source their products or raw materials in other countries.    If ever they could, they will have to bear with the higher cost and limited production volume.

Everything will redound to the bottom-line of all companies or businesses involved in the supply chain.

The cancellation of flights also took a toll not just on the manufacturing industry but also on the tourism industry.  The call to not take unnecessary trips in light of the coronavirus epidemic meant fewer people are helping spur economies in other countries.

While the cancellation of flights is basically centered on China, we have to look at it both ways – in and out of China.  Tourists from other countries can very well look to countries other than China for their leisure trips. But the Chinese tourists that fly out of China to other countries number to hundreds of millions that help to a great extent boost the tourism industry of other countries.

Checking on the profile of Chinese tourists, they usually go on group tours in a fairly large number.  This was a treat for airline companies, tour companies, hotels, restaurants and resorts. But all that dwindled with the imposed travel ban. Tour buses were idle, hotel occupancy rates and restaurant visits dropped.  Bottom-line too, is seen to decline.

This outbreak also caused the alarming rise of xenophobic sentiments.  In Japan and South Korea, it was reported that there were establishments that put up signs to not allow the Chinese inside.  These establishments are hotels and restaurants.

Locals to a particular country, but of Chinese descent, also took offense at these xenophobic statements hurled against them.  Even when they are not from China or haven’t even stepped foot in the mainland, they are ridiculed and discriminated against. Now, there were calls to not support those establishments that racially discriminate people feeling they might be carrying the virus just because they are from China or they are Chinese.

What all this costs for China

There were several conspiracy theories that arose amidst the efforts of China to contain the virus.  We will not be tackling what these theories are for lack of supporting facts to back them as true. But there is nothing more factual than how much the damage brought by this outbreak cost for China.

With the travel restrictions, dwindling tourism industry, retail shops and factory shutdowns and all other temporary solutions to avert this hit, experts project China, standing to lose $60 billion this quarter.

This is another blow to China whose economy has already been dented with the political unrest it is facing with Hong Kong and the trade war with the US.

Opportunities in the light of the outbreak

China has shown their construction muscle when as a response to the outbreak, two massive hospitals are now nearing completion only after 1 – 2 weeks construction period.

The search for a cure also boosted the medical industry with laboratories in different parts of the world are going hard at research & development.

With entrepreneurs searching for product sourcing alternatives, other countries can build up their manufacturing industries to cater to higher and quality production demand.

Alternative tourist destination routes can be explored and this can prompt other countries to intensify its tourism efforts to maximize their potential as new travel destinations.

There are opportunities to explore and more challenges to face.  So while the world is hard on containing the virus and preventing it from infecting more, we as individuals should also do our share to first, not panic and second, to always be safe and secure – keep abreast with updates and developments.

Here’s hoping that everything clears and that the negative effect on the global economy will be minimized, if not zero. 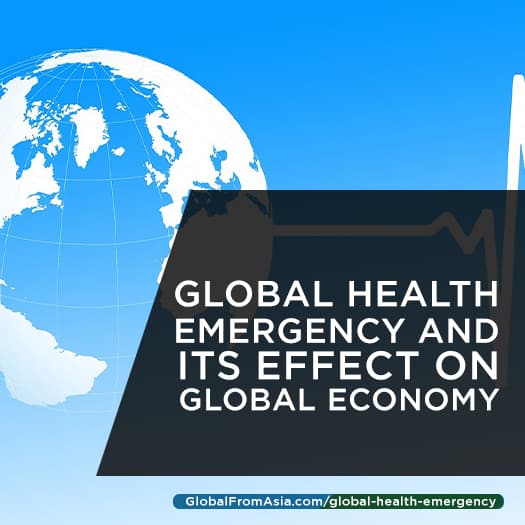 How to Open a Company in Singapore

Three Things You Need To Know About China’s Ageing Population

Announcement: Our Corporate Services Division Is Merging With Unipro