They often ask me, “is Hong Kong right for us?”

Not talking about the client’s industry or need for a headquarters in Hong Kong. This is for the situation of an American and a non-american in a business partnership.

This is a tough one, and today let’s go through some of the thought process.

That Awkward Reaction the US Citizen Has

When I was on a specific call, the American in the conference call got defensive. Maybe that isn’t the right word. He was feeling like the odd one out. He said “I don’t mind paying extra fees because I’m American, but I want to know what this all means”.

The story was, the European didn’t want to register the company in America, because he didn’t want the high tax overhead. The American had never done business outside of America, and only knew how to do a US corporation. They both had solid skill sets. People with a track record of successful internet businesses – just not in a partnership, but on their own as well.

This was a new venture for 2016. There was excitement on all sides. But the American felt the most nervous.

So then as the European said he won’t setup shop in USA, the American was like “sure, I’m game to try another country”.

But he just wanted to make sure he know what his extra overhead was. What he had to file personally each year, what he had to do upfront, etc.

It’s also worth noting, he was a permanent resident in America. Like 365 days out of 365 days. Nowhere near being able to say he was living outside of USA as a resident elsewhere. That makes it more complicated.

I explained the forms, and with the help of Oliver Wagner at 1040abroad.com – he gave this response:

The European was a smart guy, well both were. But he wasn’t as “funny” and he was straight business, thinking like a machine. He said, “If I need to incorporate in America and pay all the overhead there, then this deal just isn’t worth doing”.

He wanted to have the American guy take the extra overhead and costs for registering an offshore (non-American) company. This way the European could continue to do business as he always had, and not worry about the extra overhead.

Felt a bit strange for me. I feel like I’m in the middle of this deal. And also, as a “fellow American” – I am bummed out to hear that an American business expert might lose out on the deal.

The European just said he didn’t want to have to pay double tax and all kinds of other hassles with America.

I’m Nervous – Will Americans Lose Out?

This isn’t the first time I have heard this. I wonder how many times this comes up on a given day.

As the world goes global, will Americans fall behind? Will other global citizens leave us Americans out of business partnerships or lose opportunities because of this?

I’m not sure what the right answer is. Sure, the American government needs its tax income to sustain itself. There is a huge burden the American taxpayers have to keep the country functioning.

Yet at the same time, will it leave it behind in the meantime?

Even The Topic of Renouncing Citizenship Came Up

So, then the discussion of giving up his American passport came up. What was that going to take. Could you do it later?

If the Hong Kong company is earning money, and he doesn’t take it personal and then later gets another passport, what would happen? This isn’t my speciality. I connected him to the right people. But my understanding is if he did it later he couldn’t “escape” those taxes, he’d need to pay those upfront.

There has to be a better way for dealing with this. A citizen of one country, and doing business with people from another country. And a more straightforward way, less paperwork, less forms, less confusion, and less FEAR!

The fear of missing a form and getting a penalty.

What Do You Think?

So what do you think of the “Americans under pressure” from other nationalities when setting up a new company? Who is right?

Should the European just accept that he values this American business partner and accept the tax rate in USA and his own jurisdiction? And pay double tax? Or should the American make the extra hoops to do it the way the European wants?

These conversations will pick up more and more. As the world becomes global, what’s the future. With the internet and technology picking up steam exponentially – how are these physical borders going to treat these deals?

Fascinating to me, but scary at the same time! 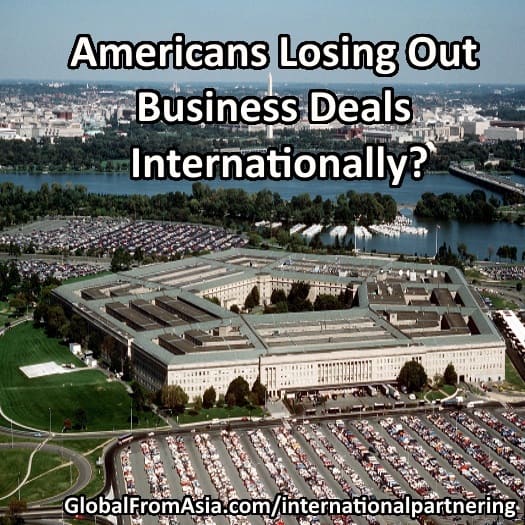 Can You Get a Job from a Hong Kong Company Overseas?

3 Ways To Import Into China (From Smuggling to Importing Legally)