Coming to Asia to do business? Hiring staff?

Then today we will teach you on how to lose them as soon as possible. How to get them to quit and tell everyone you are a horrible boss.

Well, sure you shouldn’t do these things – but we want to get the point across by learning what you should NOT do.

Hope this is fun as well as informative.

Lose Your Temper and Yell

I worked on Wall Street for almost 5 years. I know all about high pressure situations and getting yelled at. As a trading assistant on a junk bond desk, I was often on the receiving side of the yelling. They told me it was good for me to get toughened up.

Also I was in a fraternity in college. As a pledge (trying to join the fraternity) there was “light” hazing. I don’t want to make it seem like those newspaper article horror stories – but there was some sessions that were challenging.

They also said that was to toughen me up.

There were those “China times” when I started to lose my mind. Bank account transfer issues, miscommunication with factories, and countless other headaches. Just some things that a foreigner will face when getting accustomed to China business.

I lost my cool often.

That definitely didn’t make things better. Maybe even when I was on Wall Street that wasn’t the correct way to behave, but it seemed to work.

Not in China. The Chinese staff will see you as an unpredictable and “weak” minded person. And this is a big difference I have seen in business personalities between East and West. Chinese managers do not show emotion to their staff. Or to anyone.

If you look a Chinese boss, most of the time you’ll see they are calm and cool in the office. Never raise their voice, never show anger or even much happiness. It is kind of this calm overtone.

Chinese staff respect that more. This person is in control of themselves and their mind. Maybe its the Zen / Buddhist mindset culture. But a leader is more cool and calm in China.

Whereas a lot of leaders in the West (of course can’t say all) are more vocal and “flamboyant”.

Won’t say which is right. But back to this point, if you want to have your Chinese staff, as well as other staff in Asia, lose respect for you – lose your temper. They will get annoyed (whether they say it to your face or not). Especially when you complain about issues doing business in China. They may agree with you that it is cumbersome to do business here, but they don’t like to hear you complain about it over and more.

Take it from me, I’ve learned a lot from my own staff over the years.

Don’t Care About Their Family Life

I don’t have too much management experience in America in a corporate setting, so this may be true there too. But in Asia, to be a good manager means you care about the team and their personal / family life.

Especially if you’re a Western manager here, they will feel so happy that you even care about them / their family! But once you start to show a little bit of interest, they will share out in the open. You can do this in the workplace or at a company outing. Yet however you do it, even if it is a little small to you – means a lot to the staff.

If you’re in China, some examples are to ask about their hometown. Is their family living with them in the city (assuming your office is in a “big city”) or they are in their hometown “village”. This is a common question because a lot of Chinese moved to the big cities only in the last generation or two. A lot of the “older” family members didn’t have interest / desire to leave their hometown. It can go into some fascinating stories about their complex family structure. Then you can show some interest in their hometown, what kind of food comes from there, what their favorite hometown dish is.

While it might not be a smart idea to ask about their dating life. Yet if you have staff with their own family, it would be cool to know a bit about the family. Do their parents live with them? Will they go to hometown for Chinese New Year? As a new parent myself, I would love to hear how they are raising their children and what is important to them.

You can get creative here, and keep in mind China is a vast landmass! There are so many provinces with various cultures. You’ll start to learn that your staff all come from different backgrounds.

A little tip here, some managers try to hire staff all from the same province. Its not as big of a deal nowadays, but having a team that is all from similar backgrounds can make them work better together. They might have their own dialect (local language), as well as trust each other more than “other Chinese” people. Could be a fun topic to discuss with your Chinese senior management, maybe they’re already doing that and you didn’t know!

Main summary here – “care” about the Chinese culture. Care about where your staff has come from. Appreciate the hardships they have been through to get to the big city and build their career in your company!

This is a tricky one that took me years to master – or well, maybe understand as I’m still a student of Chinese management myself!

Problems and mistakes happen, in life, and especially in a company. Let’s take website design as an example. Your company designs websites, and you are working on a new client’s request. After you make some tweaks, you show the client.

Client sees an obvious mistake in the design and becomes upset. You talk to the client and say you will resolve it. Getting off the phone, you go into the staff area and talk to the staff assigned to this project.

Going up to their desk, you put the paper down and say “this design had X on it, but they wanted Y”. You’re doing this in a public setting, with other staff able to hear (and most likely everyone’s listening to every word). The team member, let’s call him Rocky, gets defensive.

He’ll immediately deny it was his fault. Getting embarrassed as well, and maybe a bit aggressive, he will fight to the bitter end that it wasn’t his fault.

I remember when this happened to me quite a few times, I was so confused. As a Westerner, I’m used to going straight up to someone and saying “this is a problem”. They are quick to say “sorry, my mistake” and fix it. Or maybe it wasn’t their fault and they’d have a counter-argument. But it was pretty painless.

So when I deal with Chinese staff now in a problem situation, I try my best to make it look like I am not blaming them. I try to be as indirect as possible and show the project and re-iterate what is wrong and not finger point.

I know, you may be saying – but if it is their fault, they should admiit to it.

I think it boils down to culture. And face. Especially if you do it in the room with everone else there, they will defend. They will treat this as a form of demotion. Even if you didn’t demote them, but in the “face score” in the company. Its hard for me to write down in words, but there just seems to be an invisible point system for “face” in the Chinese office.

Heck, maybe there is something similar like this in the Western workplace.

So the summary of this point, don’t blame and to solve the issue, just make it as non-“offensive” as possible. I know, it goes against the way you work, and the way your mind thinks. Just think and plan out the conversation before having it.

Be a Weak Leader

This one is a tough one for me to describe. My style is to be more of an open and level playing field kind of leader. But it is a dangerous act to play in the Chinese workplace.

We covered this a bit in the “Yell At Your Staff” point above, but it is worthy of its own section. On top of being “calm and cool headed”, you also need to show vision and clarity in the company direction and decision making.

If you look wishy washy, or you ask the staff to make decisions, it will not be a good outcome. They want the boss, the leader, to make the decisions.

This is why when you try to do business with a Chinese company, you need to wait for the CEO to sign off on almost everything. It is hierarchal and subordinates are not expected to make big decisions.

Again, this is a mind shift from your Western way of thinking and modern management training. At least for me, I enjoy having my team involved in the decision making process, and I don’t mind to admit I was wrong.

But in the Chinese workplace, if I am admitting I made a mistake, the team will see this as weakness. Just like the “blame” point earlier, if the boss admits fault – then the staff will question his or her experience and vision.

Tricky one here – and a reason a lot of Westerners don’t end up being the daily operations manager in a Chinese company. Most of the time a you need a local manager or a Chinese partner in the company who manages the staff. Things like this are so hard to describe – it’s a lot of indirect power measuring and balancing.

I’m no saint here, I have made many of the mistakes listed above. But the key is to be aware of them. To catch yourself making these mistakes and working towards improving.

Mediations is my favorite thing to do now to ground myself and act better under pressure. Especially away from your home country in China or other parts of Asia – we need to realize this is a foreign place. Respect the land and the people. Take a deep breath.

Or, if you really can’t handle it – hire an office manager and go back to your home country. No shame in that, many great business people have done it. 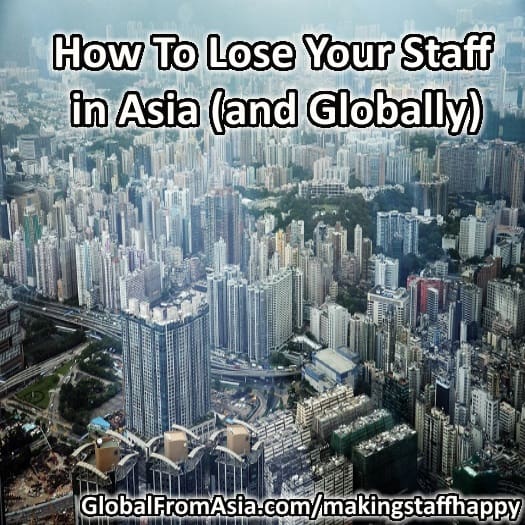 What Do you Need, License, To Sell in HK