Nowadays, modern innovations, as well as social media, both have played a big role in opening up a whole new world of possibilities both for business-minded people and those who take the creative role. One of the platforms which have gained much popularity is Kickstarter. In fact, it has allowed several financial prospects to be made accessible especially for self-starters who wanted to prove something for themselves.

So what exactly is a Kickstarter?


To explain it simply, Kickstarter is a funding program where these creative individuals can share and stimulate awareness or attention on a certain unique project or idea they would like to launch.

It is supported by crowdfunding which suggests that any financial assistance they get from the general public is what fuels these projects to kickoff. Just think of it as colleagues, random strangers, supporters all coming together to shell out funds in exchange for possible rewards or possibly credits from the successful outcome of these projects.

The organizers of these projects can either come up with a page or website to share the details of their ideas and plans which can be done through photos, videos or texts. These organizers also have a funding goal and target completion date. Supporters can as well obtain rewards based on the amount they have pledged.

As soon as enough funds have been put together for the project, fulfillment process can then begin. Some supporters who have contributed funds may have to wait for months, depending on how complicated a project may be.

Even if Kickstarter is a popular platform, they don’t approve every project being introduced to them. There are guidelines which every creator has to adhere to in order for their ideas to be considered. Most campaigns fall under the tech category, although some successful ones include games and even apparels. Kickstarter is a great avenue for creative people whether they’re interested in films, music, designs, creative arts, etc. At the end of the day, it is all about coming up with a great idea and a genius plan to fulfill it.

Here are five successful Kickstarter campaigns which have definitely tickled the interest of the general public and have gained a great following in just a short span of time:


This card game was created by Elan Lee, Matthew Inman, and Shane Small. This is a cat-inspired version of Russian Roulette wherein players take turns drawing cards until one of them gets the exploding kitten and gets kicked out of the game. The campaign became the third biggest one by Kickstarter. The initial plan of the creators was to raise 10,000 USD, but eventually got 219,382 backers. A mobile version of the game was also released both for iOS and Android platforms.

This is deemed to be the world’s best travel jacket. It boasts of 15 features such as a phone-charging pocket, eye mask, neck pillow, pockets for passport, sunglasses, phones, and a big pouch for a tablet as well as a blanket. In fact, they have also made several variants out of this unique jacket to accommodate both women and men’s tastes. Keeping you organized and at the same time comfortable is what this unique innovation is all about.

Who hasn’t heard of it? Who would have thought a simple watch can alert you of any incoming calls or messages and even go as far as tracking your workouts? Pebble campaign was able to raise as much as $10.3 million through Kickstarter when they started way back April 2012. As of December 2016, Pebble has filed for insolvency citing financial issues. Fitbit has purchased intellectual property rights for fitness tracking which they now use on their wearable items.


This multi-function cooler is jam-packed with amazing features brought together to come up with a truly innovative creation. It has a Bluetooth water-resistant speaker, a blender, USB charging port, bottle opener, LED lamps and so many more. It was listed by Time magazine as one of best inventions for 2014. It is also considered as the most funded campaign in that same year.

This miniature game is considered to be one of the most highly-funded projects under Kickstarter’s game category. Despite its rather gruesome, graphics and mature content, this game managed to have a great number of followers and was able to pull off more than $5 million during its first week.

So what made these projects successful? Ingenuity. Followers. Timing. Execution

Every creator has to do his own homework and should have a clear plan on how to execute the campaign. Even the most brilliant idea has to come with the best timing and a great number of followers for it to thrive. Creators would have done their own research regarding fulfilling and implementing every small step needed in their campaigns. Rewards have to be realistic and should be proportional to the amount of contribution given.

Details such as the name and description have to be carefully planned as this can be detrimental to the success of the campaign. It has to be catchy and interesting enough to draw attention. One other thing to consider is also the duration of the campaign. Statistically, shorter campaign duration can attract more pledges as this can draw more motivation from people who’d be compelled to shell out funds right away.

Also, as Kickstarter would put it, support comes primarily from those people you know. It is important to reach out to these people first, make them understand your campaign and your plans for implementing it. This would include friends, colleagues, relatives and anyone who would be interested in what you have to offer.

Sending your message across to your contact list is imperative, but you may need to customize it to match their unique personalities and perspective. Conservative older people may be harder to convince and may not be as perceptive as younger ones. Still, it is important to target both groups to entice other individuals from their social circles.

There you have it. It takes more than just wit and brilliance to come up with a successful Kickstarter campaign. When are you going to start yours? 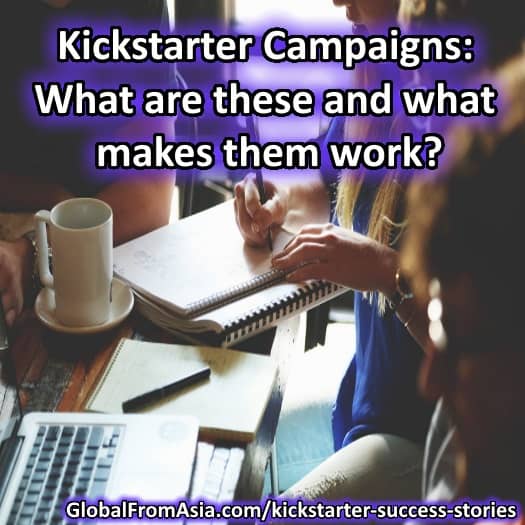 Are Americans Doomed to Be Disadvantaged Doing Business Overseas?

Overview of Hong Kong Warehousing and Logistics with Danny Sung