Cryptocurrencies are the hottest topic nowadays in the business industry. Last year, Bitcoin made a huge buzz by achieving a huge milestone that surprised everyone. The leading cryptocurrency has proven to all its critics its value. Bitcoin’s massive success despite its volatility has opened more doors for new cryptocurrencies.

Asia is known to be a huge player in the cryptocurrency arena. This is one of the reasons why the number of initial coin offerings or ICOs is rising in this part of the world.

We are excited to update readers – Global From Asia is now covering ICOs! Check out our full ICO review and daily listing service today!

What are the leading initial coin offerings in Asia? Here is a list of the leading ICOs in Asia in no particular order.

Qash is the biggest Asian ICO in 2017. Issued by Japan-based Quoine, the offering managed to raise US$112 million. The good thing about Qash is that it seems to be more resilient compared to other cryptocurrencies in terms of 2018 market performance. While the majority of the other cryptos took a beating, Qash was able to buck the trend.

In fact, Qash managed to grow by 273 percent since the year started. Last January 1, the crypto just traded at $0.86. By January 15, 2018, however, the price already rose to $2.35. To put it in simple terms, if you had invested on the crypto last January 1, you would have multiplied the worth of your investment by 2.73 times in just 15 days.

Issued by Japan-based Tech Bureau, the crypto’s ICO managed to raise US$96 million by the time it closed in November of 2017.

The name Comsa is actually derived from the words “Computer” and the words 鎖 (Kusari/Sa), which mean “blockchain” when combined. The company aims to make Comsa the one-stop shop that will enable “existing enterprises onto blockchain and then bridge their private blockchains to the public blockchains of Ethereum, Bitcoin, and NEM.”

Tenx is issued by the Singaporean-based company of the same name. It closed its ICO by June of 2017 and managed to raise US$83 million in funds.

The PressOne cryptocurrency is issued by Chinese firm Press.One, one of the few that managed to have their initial coin offerings before the country decided to ban ICOs late last year. While not the largest ICO in the world, PressOne managed to turn heads as set a new record for Chinese ICOs back then having managed to raise more than $80 million in funds.

Tronix is the name of the crypto issued by the Chinese company Tron. When its ICO finalized back in September last year, the company managed to rake in US$70 million in funds from the event.

It has been one bumpy ride for Tronix. True, the cryptocurrency market is still in its initial stages and is far from stable. As such, price corrections are bound to happen now and then, and this is what likely happened to Tronix, and all cryptos in general.

However, the celebration was short-lived. Since that one day peak, Tronix’s price promptly dove down on the succeeding days until it eventually reached $0.08, a massive 70 percent drop for such short period.

Kyber was launched by Singaporean firm KyberNetwork. By the time the ICO dust settled last September, the company was able to obtain a total of $60 million in funds.

But just like most of the cryptos out there, Kyber is also affected by the latest downturn in the crypt market. On the latest trading, Kyber’s price fell by a massive 15.45 percent (broken link https://kgazette.com/january-16-17-was-a-bad-day-for-kyber-network-knc-after-15-45-fall/ ) for the past 24 hours last January 17, 2018, until it settled at $2.9345. Of course, there is no telling when until when this correction period will last, but experts predict that its price could settle somewhere in the $3.22795 area.

VeChain is the cryptocurrency issued by a Chinese firm of the same name. During its ICO last August 2017, the crypto was able to generate US$49 million in funding.

As of January 11, 2018, experts were very optimistic on VeChain’s prospects. At that time, the crypto already rose by 938 percent for the past 30 days, skyrocketing from its previous price of $0.57 until it traded at $6.89. Despite the rapid rise, many believed that currency was still undervalued. Its latest price of $4.95, however, suggests that the crypto is not immune to the current downturn of the whole crypto market.

The cryptocurrency Loopring was issued by a similarly named Chinese firm.  During its initial coin offering back in August 2017, the company generated $45 million in funds, slightly less than its Chinese rival VeChain.

Just a week ago, International Business Times predicted that Loopring has the potential to triple its price by the end of 2018 more than. But given the current weak sentiment for the entire crypto segment, it remains to be seen of such potential will be fulfilled by the end of this year. As of the last tally, Loopring seems to be in pretty bad shape as it suffered a 16.20 price decline in just a day (https://heraldks.com/the-crypto-loopring-lrc-had-16-20-fall-for-a-day/ no longer working) of trading last January 17.

Aside from the current downturn in the cryptocurrency market, the newly-minted mode of payment and investment vehicle is now facing new challenges up ahead. Despite firmly establishing itself in the financial world, it has to face the bigger challenge of government intervention.

For instance, the Chinese government has now shown itself to be extremely anti-crypto. Aside from banning their ICOs last September, the country’s financial authority is now keen on stopping all forms of trading of the virtual asset.

Meanwhile, South Korea seems to be similarly inclined. The country has already banned any form of fundraising activities and plans to monitor the activities of cryptocurrency exchanges strictly.

However, a Forbes article is a bit optimistic on cryptocurrency’s prospects (broken link https://www.forbes.com/forbes/welcome/?toURL=https://www.forbes.com/sites/forbestechcouncil/2017/12/11/how-will-the-china-and-south-korea-ico-bans-impact-cryptocurrencies/&refURL=&referrer=#561e47285124 ) . While the crypto bubble may likely burst, the article predicts that it won’t be enough for other governments to follow China’s lead and totally ban cryptocurrency as a mode of payment. 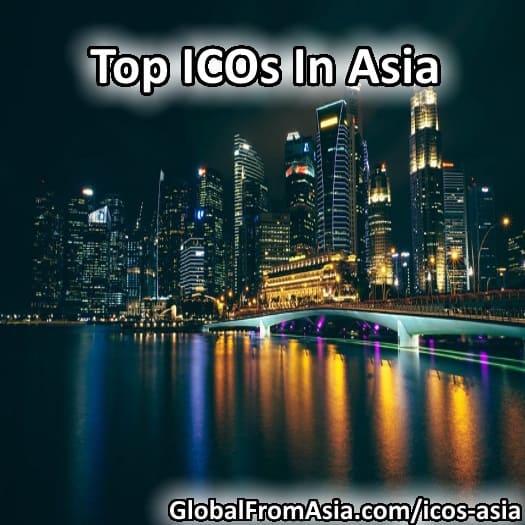 Choosing Asia or Silicon Valley for Your Business with Phil Wickham

2 Comments on “Top ICOs In Asia”