Deciding which city in China to base?

Considering Guangzhou, the capital of the Guangdong province in the south of China?

Then read on my friend!

Today we will go through the pros and cons of living in this capital city of the China’s southern region!

This article is also helpful to many as a pros and cons of living in china in general, not just Guangzhou.

In the Heart of The Factory City

Guangzhou is where a ton of Hong Kong import and export companies base their sourcing operations. It is nearby all the major south China factories, as well as in a downtown city environment.

You can take a train or bus to Dongguan, to Foshan, to other obscure and smaller factory cities all around the PRD (Pearl River Delta) within an hour or so. This is getting to be more and more important as the costs of China increase.

As costs of China increases, so does the cost of production – in the form of higher labor and rent costs. So these factories need to go further inland. Many stick in the south of China but take a couple hours trip away from Guangzhou city.

So you can take your factory car or bus to these factories and still make it a day trip or a quick overnight trip.

If you’re living in Hong Kong or even Shenzhen, you have a longer trip to these Chinese inland factory cities and it is much more of a “trek”.

Guangzhou has trading in its blood. For centuries it has been a hub of trading products in and out of China, as well as throughout China. Just taking a quick walk through various parts of the city, you will see blocks of marketplaces.

These marketplaces range from electronics (though a lot more electronics markets in Shenzhen), to gadgets, to home and gift, to even food!

What’s the difference with a marketplace and a factory? A lot! A factory, you normally have something called an MOQ (Minimum Order Quantity) and that is typically in the 1,000 piece range. That is not a problem if you are already an established business with a developed product line, but as a hustling entrepreneur, you may to know exactly what product is right.

That is where these marketplaces come in handy. Yes, you can call them “middle men”, but oftentimes they will call themselves factory representatives. They have small booths in these markets where you can see some samples and they have a limited stock on hand. You can buy as little as 1 piece! This can help tremendously when you are testing a new product or learning about a new product category.

Want to take it to the next level? Rent an apartment or an office space across the street from the market, buy 1 piece of every product you can find, take photos, and start a drop ship e-commerce website! When you get an order, you can simply go downstairs, buy it for the wholesale price, put your packaging and printing packing slip and get it out in the mail that day or the net!

You just got into business without investing a ton in inventory. The tricky part is getting good, consistent quality from these marketplace vendors. That is your long term value. You may use this as a way to develop your market and find out which products the consumer wants. Then you can grow your business to go direct to a factory and buy larger volumes and make your own brand on Amazon.

This kind of business model can be done from other Chiense cities as well – it really depends on what product category you are focusing on. Guangzhou is known for the “non-electronics” – such as textiles (clothing) and home and goods. But keep in mind a lot of these are also going to Zhejiang province (FOB Ningbo).

But Guangzhou overall is a great place for low MOQ marketplaces of home and gift products.

Costs Are Generally Lower (Than Hong Kong and Shenzhen)

While Guangzhou is the capital of Guangdong province (the south of China) – the costs don’t always reflect that. Maybe because it is a hour or two inland from the sea, or maybe because it is so vast – costs have not increased as much as in Hong Kong and Shenzhen cities.

Many people can get a decent apartment for a few hundred dollars a month. You may not be in the city center, but still within the subway system and have a good quality of life (generally speaking, for China standards).

So if you’re a bootstrapping entrepreneur, and every dollar counts, Guangzhou should be one of the major cities on your list. That is, unless you really want to go “deep” into China.

It’s an ancient city. There is still a ton of culture left for you to see. It is the heart of the Canton era, and you can spend days browsing various sightseeing places. To be honest, I am not in China for the tourism, but I know many who have had great sightseeing days in Guangzhou.

Maybe I’ll get them to do a guest post one day! But even me, I have wandered around Guangzhou on various occasions and been awe struck at some of the architecture and sights I have seen. Youll get that in various parts of the city for sure.

You Live Where the Canton Fair Is!

The Canton Fair is the oldest trade show, and the most famous. Many go to Global Sources Show in Hong Kong (or HKTDC) and then into Guangzhou for the Canton Fair.

If you choose to live in Guangzhou, then the Canton Fair will be on your home turf. This comes in handy as it is about a one month long trade fair two times a year. There are 3 phases about 4 – 5 days long each, with a few breaks in between. You can save a ton of money on overpriced hotels and food during this phase, and meet plenty of factories and international buyers as they come through.

The Canton fair is twice a year, in Spring time (April) and Fall (October). Heck, maybe you’ll save money having an apartment there year round just for those 2 months for the trade shows!

One negative for me living in Shenzhen is there isn’t a single USA Consulate. I need to travel over to Guangzhou (Or Hong Kong) for my US Citizen Services perks.

This is the case for most country embassies. So if you’re based in Guangzhou, you can easily get to your country’s embassy, as they normally choose the capital cities of China for their base.

Some of the Cons of Living in Guangzhou

Now that we put the good stuff first, let’s add in some of the drawbacks or cons of living in the city of Guangzhou, China.

Major Language Is Cantonese, Not Mandarin

Listed as a pro earlier, Guangzhou is the heart of the old Canton era. That means they still hold Cantonese language close to their hearts. Going there, even using an Uber car service, they speak Cantonese, not Mandarin, not English.

Sure, the education system is pushing more for English and Mandarin. But Guangzhou city you will definitely have more exposure to Cantonese than most other major cities in the South of China.

The rest of China (i.e. the North) has fully adopted Mandarin Chinese while Guangzhou and other Cantonese cities of the south are still holding onto their mother tongue. Sure there is the who “respect the classic culture”, but you as a Western business owner need to realize that business is business.

You should learn Mandarin Chinese. That is the official language of China, and will be the dominant dialect / Chinese language for the long haul.

By basing in Guangzhou, you will not have as much “pure” exposure to Mandarin language, and may even get some sloppy Mandarin classes that has various dialects mixed in. Many of my friends from the North of China say how hard it is for them to communicate in Chinese in the “dirty south” as there are so many various Chinese dialects mixed into the daily language.

Be Weary of AirBnB in Guangzhou

Be careful of Airbnb, this is a message I got from a friend in a Wechat group (June 2017):

I rented an apartment through Airbnb in Guangzhou for a month. I know I could have rented it for 3. But just be cautious when going through Airbnb as may advertise a particular apartment and when you arrive it turns out to be in an entirely different apartment. Also when I lived in Shanghai one of my flatmates went traveling during his Uni holidays for 2 months and he found someone through Airbnb to rent it off him for 2 months. So there’s definitely options available like that. If you have a bigger budget there’s a few professional outfits which rent fully furnished apartments for short term rental. Wechat group

The City is Old

There are some parts of Guangzhou which have been renovated, but for the most part a vast part of the city is still old. Like 100 years old or so. That means you’ll probably live in an older building, older style neighborhood, etc.

This is what also keeps the cost of living down. Probably the next few decades all these districts will be knocked down and revitalized (and you’ll live through the construction of it!) – but for now, expect to live in an older building and an older neighborhood.

Again, this is a pro and con at the same time. You get the “old China” feel, the lower cost – but also not as much the “Western” lifestyle some foreigners want. You can get that if you’re living in the expat area, but you will pay for it!

So What Do You Think of Guangzhou?

That covers a lot of what I feel is the pros and cons of living in Guangzhou city. Its about a 2 hour train ride to Hong Kong, so not too far, but hard to do a daily trip. I still prefer Shenzhen, as I have a ton of border crossing options and can get to HK for the day and back no problem.

What city in China are you leaning towards? We have various other city comparisons and guides in our Global From Asia blog, feel free to browse and search.

Now it is your turn! Please leave a comment below with what your research has found. Do you enjoy living in Guangzhou, if you’re there (or have lived there)? Sharing is caring! 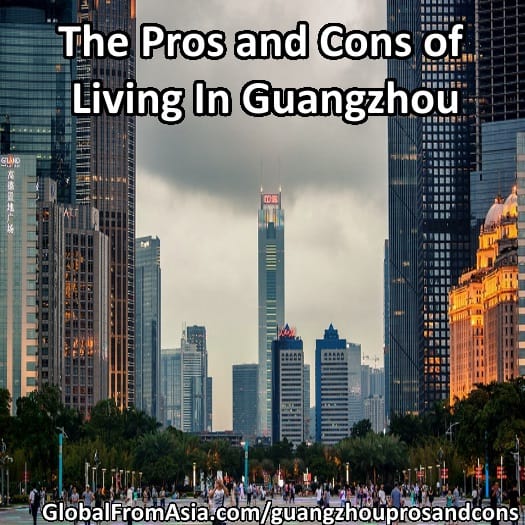 Border Hop Between Hong Kong & China (A Day in the Life)

How to Open a Company in Singapore

The Rise of The International Entrepreneur

Getting Healthcare As an Expat in Hong Kong or China

2 Comments on “The Pros and Cons of Living In Guangzhou”