Want to build your own country and government on a floating island, yes, crazy – let’s try this out – global from asia episode 88

Thanks for joining me on episode number 88, lucky number here in China – this is true, and I am so lucky and fortunate to have you tuning in with me today and sharing with your friends

Today is a pretty far out concept, but since we do deal with international business and a lot of that overlaps with governments who are still trying to keep up their walls and barriers – I want to introduce on the show an idea that is still rather early stage, called SeaSteading – I heard about it from the bitcoin community as there is some overlap in the ability to have an independent / government-less currency alongside a new/non -government state of seasteading.

So we will discuss how Using Seasteading To Build Your Own Floating Country and we brought on with us Leo Weese who is the ambassador in Hong Kong to share what this exactly is and where its going so let’s listen in:

So today’s show is a little bit out there, let me know if you think I’m crazy to have this show on!

Thanks for coming on and sharing Leo – i hope you guys like this show – give me feedback – was it on track to s something you’d listen to – or too far out there? I personally think its fun to have some episodes where we explore really early stage ideas and see what people can do with them,

who knows maybe this will inspire a listener to pick up seasteading and do something with it! But i think it is true, governments around the world are freaking out as they no longer have as much ability to put up walls and barriers like in the past and are trying to adapt to this new society – what do you think – i’d love to hear some feedback on comments at globalfromasia.com/episode88

til next week guys, cheers! 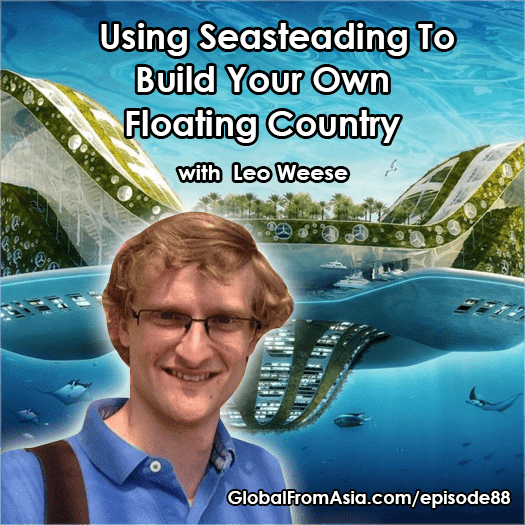 Obtaining US Intellectual Property from Asia with Tayan Patel

Acquisition and Turning Point: The Latest In the Ecommerce Venture with Marc Roca