I just so happen to be in Europe during the big announcement of the UK voting to leave the EU. It is named “Brexit” – and people all around Europe are going crazy talking about it.

Local friends here in Prague (where I currently stationed on business trip) have been working overtime dealing with talking to clients asking what this means for their business. Currency fluctuations, business contracts, immigration – everything is up in the air right now.

Some Letters I Have Received

I think instead of me just talking in first person, I’d share a couple letters I have received from readers and clients.

This is one from a UK business owner who has done a great job building up her business over the years. Now she is fearful of the future in her home country and looking for options:

The UK has just done an amazing self harming effort and I am now looking for ways to protect my business from the effects.

From American clients of mine who do business with British businesses. He is wondering the risk exposure he has.

Your British political acumen is vastly superior to my own. I wanted to ask for your opinion on Brexit and what the results mean for the UK over the next few years.

Let’s now look at some friend’s reactions to the news.

Reactions I have Heard From Other International Business Enthusiasts

To me, this seems like a win for other countries and a negative for the UK – business and money wise.

I have read some Facebook comments from some British friends and they say that its not just about money. Its about power and freedom. So they think in the short term this may hurt them economically, but in the long term it will be a net positive.

Other friends here in the EU are buying a bunch of things online from Amazon UK. They say the prices are at a discount due to the currency drop. So they are taking advantage while they can.

Overall, the reactions I have heard is the business community thinks it is a bad idea, where the more “patriotic” British crowd feels it is worth the short term set back for their long term independence.

For me, as a business person, I see this as a negative for the UK. Sure, independence is great – but is it worth the expense of the economy and future of future generations of British people?

Will London Become a Special Administrative Region Like Hong Kong?

A Dutch friend says he worries about London. He says so many of the talent working there are immigrants and that with this uncertainty in the country – it could affect immigration policy.

If it gets too hard for talent to immigrate to London, then businesses may lose out on quality talent. If that happens, other countries will get ahead. It will then mean businesses who remain in London and UK will be at a strategic disadvantage to other countries. Then businesses in UK will not be globally competitive and then become redundant.

Sure, this is extreme doomsday type thinking.

The other side of the conversation was maybe make London a special administrative region like in Hong Kong? That way, they could have a more free and open economic and immigration policy separate from the rest of the UK (which seems to want to become more closed?). This would allow London to stay globally competitive and an economic leader in the world.

Pretty far out ideas, but could be a fast way to keep London relevant. I hear the startup scene there is growing very well, and hope this political news doesn’t hurt it too much.

The big idea here is – so many people didn’t expect this vote to go through. Those with a lot of UK exposure, or Pound Sterling currency, took a hit.

But besides the stock traders and speculators, the others hurt are the local British business owners.

I feel for them. And this is just another reason why it is worth diversifying your business a bit globally. Like the letter I received, she wants to now expand to Hong Kong sooner than later. She doesn’t know the future of the UK business environment. She won’t close her UK business, but she wants to have a hedge.

Dealing purely in GBP is risky – and she currently has no multi-currency option. I commend her for taking the initiative to establish an international presence. In the email she also explained she is selling in Asia already with a decent percentage of her revenue coming from there. By having a Hong Kong entity, this will further boost her business relationships with these clients – as it is easier for them to buy and sell to her company in HK.

What Are Your Thoughts on Brexit and International Business?

I find this stuff fascinating! How about you?

I think the bigger concerns for British business owners is:

* Exposure to the Pound currency – loss of money in longer term contracts (30 – 60 days) when getting paid or paying out.
* Other international clients may worry about political risk – already in Prague people are worried about what will happen in UK for business relations and contract law.
* Immigration policy – what is going to happen now for immigrants? More open, more closed?

Am I missing something? Are you British? A business owner? I’d love to hear your insights and comments in the comment box below. 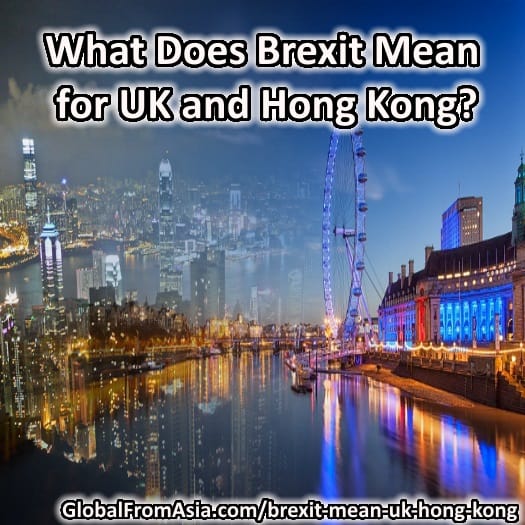 Manila: Things To Know About This Philippine Capital

A Business Guide to Taipei: 10 Things You Need to Know