China is the world’s largest manufacturer and it has the second largest economy next to the United States. For this reason, China plays an important role in the global economy. Unsurprisingly, many expats relocate to China for business purposes. China’s financial capital is very attractive that many expats move in for incredible opportunities. From a survey conducted by HSBC, an expat in China earns $170,970 average gross personal income per annum, compared to the global average expat income of $99,900. Interesting, right? However, taxation in China is very complex that many expats find it difficult to comprehend. Just recently, a draft amendment to the Individual Income Tax Law was proposed and expats will surely be affected when the basket of changes take effect. What’s in the draft law? And what are the new tax laws coming for expats in china? Read on to learn more.

1. Revision on determining tax residency status. Foreign nationals who have physical presence in China for at least 183 days would become liable for Individual Income Tax (IIT), unlike before when non-residents have one full year year before he/she be subject to IIT. Its purpose is basically to protect national tax rights and interests. Whether the income is sourced inside China or not, the tax residency status will be based on how long an individual resided in the country.

3. Anti-avoidance Rule. Anti-tax avoidance rule was introduced in the draft law – wherein authorities are strengthening tax collection especially to individuals having cross border transactions and tax plans. Its main purpose is to avoid multinationals to transfer or move profits to affiliates in low-tax havens and to tighten the IIT’s overall application and enforcement.

5. Tougher stance on foreign companies. Foreign companies should pay special attention to changes affecting the timing of the tax levy on foreign employees, foreign labor costs, contract profitability, and budgeting requirements, as well as the rippling effects they have on withholding and tax equalizations.

6. New Tax Brackets that would benefit middle and low-income groups.

Apparently, high-income earners don’t really benefit so much from this amendment. So, basically, if an expat in China earns USD170,970 average gross personal income per annum or around 95,000RMB per month, no matter where that income was sourced and regardless of where the payment is made, he/she would be subject to 45% IIT tax.

China is indeed a booming economy with unending opportunities. The proposed tax reform simply relieves the tax burden of small and medium sized enterprises as well as middle and low-income individuals while optimizing the business environment through higher consumption.

Disclaimer: if you’re an expat in China, it’s best to consult a taxation specialist in China to help you more understand the country’s upcoming overall tax amendment that is expected to take effect on January 2019. 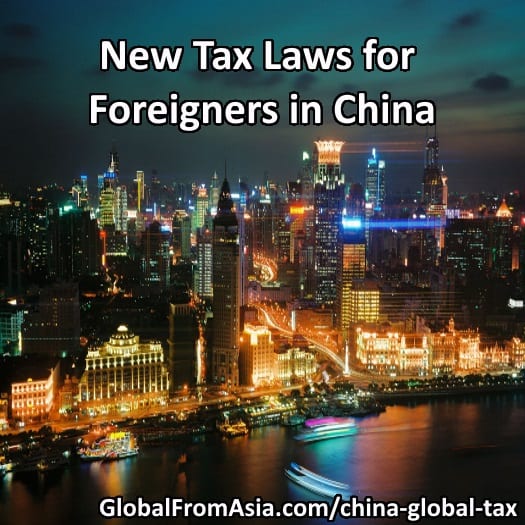 Declined for HSBC? Why Hong Kong Banks are Getting Stricter

Should I Set Up an Offshore Company?