Episode 61 today, thanks everyone for checking in, hope my fellow Americans listening today had a good Thanksgiving holiday last week, I myself kept it simple and joined a friend at his place and had “turkey in a bag” which sounds pretty disgusting but tastes pretty amazing! And I’m thankful for you guys, listening to today’s podcast and those who are taking action and improving their businesses in Asia!

So this week’s show is the second part of a 2 part special series where we interview some of the speakers from the StartMeUp HK Venture Forum. This one today we have Richard Robinson, a veteran in the Chinese startup and internet space and a fun guy to talk to! It is a bit short as we had limited time in the VIP room before the event started, but Richard is very charismatic and shares some great inspiration and insights for those Westerners who want to “Conquer the dragon” in Chinese tech startup space, so listen in!

Richard is the Co-founder and President, International of Yolu Inc and the Co-founder and Chairman of Kooky Panda. He is an active entrepreneur, advisor and angel investor, based in Mainland China. Over the past 14 years, Richard has been co-founder and CEO of Dada Asia; co-founder of Shouji Mobile; Vice President of International for Linktone (NASDAQ:LTON); founder and CEO of MIG which was acquired by Glu Mobile (NASDAQ:GLUU); and a founding executive as Vice President of Marketing and Sales for renren.com. Richard is the Co-founder of the first Beijing Chapter for EO (Entrepreneurs’ Organization) and the co-founder of ChopSchticks Comedy. He received an MBA from the Rotterdam School of Management at Erasmus University in The Netherlands in 1996, and a B.S. in Business Administration from the University of Southern California in Los Angeles in 1989.

Thanks Richard for sharing. I wanted to get more speakers from the StartMeUp HK venture forum, but due to the merger of Social Agent and Unchained Apps, I had to rush back to some urgent matters for that and couldn’t get the other interviews I had lined up! But still have a ton of great shows lined up for weeks to come, will mix it up with some Hong Kong business sessions and also some fun and insightful interviews. I always appreciate feedback, reach out to me at mike@ globalfromasia.com and if you enjoy the show, please let me a review on iTunes – it not only makes me feel awesome and motivates me to keep making shows, it also helps other people find the show when searching through podcasts, so its a great way to support the show! Cheers 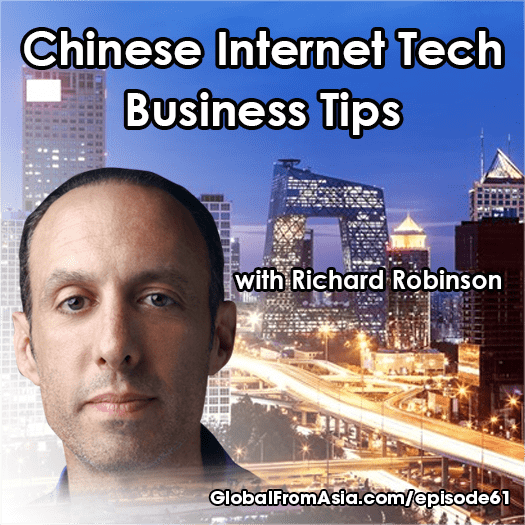 Building a Global Translation Platform from Asia with Markus Seebauer

Getting a Hong Kong Credit Card

Defining Product Specifications For Your Manufacturing in China with Saral Kochar

How to Start Learning Chinese with Norajoy Wilson