Based on our wildly popular blog posts on differences between Eastern and Western culture in terms of education, we have written this on the business side of things, enjoy!

This is something I quickly learned when I had a factory order problem. The factory owner was able to keep a straight face (aka poker face). I was so emotional, and I kept getting tips from my Chinese business friends to not show that to the factory. It is a sign of weakness. It is not good for negotiating.

This bullet point could be expanded to an entire book – but for the use of this article – try to not show your emotion. Keep a poker face when doing China business, to your staff, to your customers, to your suppliers.

There is the classic Asia business tip to give your name card with the words facing to the receiver and using 2 hands. I still follow this rule – and catch myself doing it to foreigners even (its a habit, what can I say!)

But the most important part of this rule is to pay attention to what is written on the name card. If you are at a trade show or business event, you’ll notice Chinese business executives study your name card when you pass it to them. I remember when I lived in the West, we would glance at it but instead focus on the conversation and go back to the business card later.

It is true – people are all on Wechat now. Whether it is a digital name card or a paper name card – people want to see your profile when you are introduced.

Title matters. I know many Western startups where the title really isn’t important and its about ability and who you are. And there are some business cards are like “marketing ninja” – which is cool – in the West. But in China and Asia I think we are a bit early for that.

Same goes for meetings. Who you said, what their title is. Position of “power” matters a lot in Asia. So I strongly suggest when you are coming to China that you pay attention to titles and business cards. Not just for a visit, but it is an ongoing process that we need to adapt to.

Always Keeping A Position Of Power In Business Deals

On calls with clients, they ask me they have a Chinese potential customer for their service. Selling services in China is an art for sure!

The positioning is like a game of chess. You need to always have some kind of leverage. Maybe this is true everywhere (as I have said, I’ve been in China over 10 years and lose sense of my home country and culture!) but I still feel it is especially true in China. You need to have a lever you can press to pull the power back to your side in a negotiation.

Not saying you should use it, or even bring it up! It is this silent negotiation that is happening behind the scenes of the verbal communication. Hard for me to explain in a text article – but there is a saying “be a duck – look calm and cool above water (to the public) but paddle like heck under water (behind the scenes)”.

Again, this whole “not showing emotion but having power and positioning”. This is the game of China business, in my humble opinion. So whenever structuring a business deal, show that you have a position of strength to play on.

Leverage in a business deal is much stronger than a signed contract. Keep this in mind, it is often said the business deal really starts after the contract has been signed.

Always Showing You Have Options

Similar to the above positioning point, but the business culture is really just about showing you are not stuck with just one. We are dealing with Chinese factories often as e-commerce business owners, and you need to make it seem there are other factories you are talking to.

What happens is- as you invest time and energy in one factory, and are about to place an order – often things come up that increase the price. Oh, you want the special handle, or you want a certain color that we need to order. The items get tacked on – and what happens is that you are getting impatient and have already mentally prepared to buy from this factory.

So, you can get offended and walk away. But the China business way of doing this is to leverage that you have other factories. Show them the samples, show them the quotations even. It is a negotiation. It is an ongoing process even if a contract has been signed. This is where so many Western business owners get frustrated – they give up towards the end of a negotiation as it seems it will never end.

So you need to combine a few points in this article – patience / not showing emotion, having leverage, and showing you have options. It is a game, life is a game when you step back and think about it. So if you can deal with this, that is great, if not, practice or stop doing business in China!

The Deal Is Still Being Discussed Even After Signing

And the final point is – so many say that in the West once a contract is signed it is a done deal. And its true, contracts are contracts and they need to be honored.

I don’t mean to offend, but many Chinese businesses I have dealt with often feel it can still be negotiated. That if something no longer is convenient for them, or as profitable, discussions can come up again. The reason I think this happens is that they agree a bit too easily to a deal, or they think it can be discussed again later.

This drives Western business people insane! They feel a contract is final, and must be followed no matter what. The Chinese thinking is, if it is no longer convenient to me, then I should be able to discuss with my counterparty and update it.

What Do You Think of Culture Differences in Business Between East and West?

I’d love to hear your own experiences and input on what cultural differences you have noticed when doing business deals in Eastern and Western culture.

International business is a huge challenge, and if there is one point out of all of this that I can say is – be patient! Be respectful. Getting frustrated and offensive is not doing anyone any good.

And last point, I learned TIC – This is China. You’re not going to change it, so if you want o do business in the East, or China specifically, you need to adjust to it.

Good luck to all. 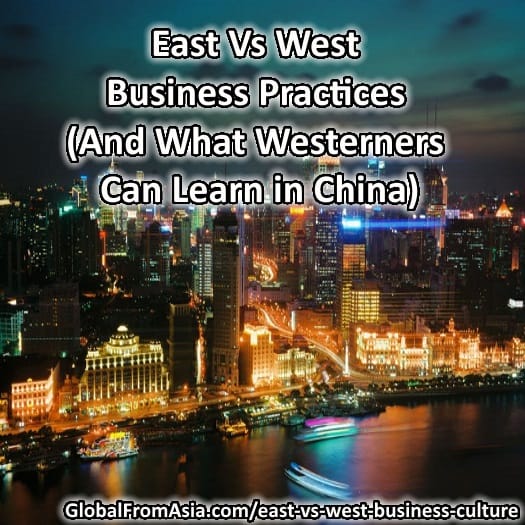 Bypassing US Tariffs Via Hong Kong