Wondering what is happening in the world of international insurance?

Besides banks upselling insurance to new clients (doh!) there are more things happening like inflation!

The cost of healthcare around the world is constantly rising, and no one knows this more than expats and foreign workers. Unless you’re from a country with a generous public health system, such as the UK’s NHS or France’s Couverture Maladie Universelle, the notion of purchasing private health insurance which offsets the rising cost of healthcare while covering your medical needs is a familiar one. When you’re an expat, usually you have no choice in the matter of whether you need to buy health insurance.

The concern here is that like the cost of care, it is pretty much a certain thing that health insurance premiums will also increase. One of the most common questions people ask when it comes to health insurance would be around why insurance prices keep climbing year-on-year?

There are a number of factors that influence how much premium prices inflate around the world and knowing what they are can help both individual and company insurance consumers understand what determines what they pay for coverage, and what to expect in future.

So what drives insurance inflation globally?

According to Pacific Prime’s International Private Medical Insurance Inflation – 2017 (IPMI) report, there are a number of key factors that positively and negatively impact the rate of premium inflation each year. Whilst there are of course regional factors that come into play, the broker has found that there are four main drivers that have generally influenced insurance prices the world over:

These drivers have had a constant influence on the price of insurance premiums around the world since the inception of the IPMI report.

A brief look at insurance inflation in Asia 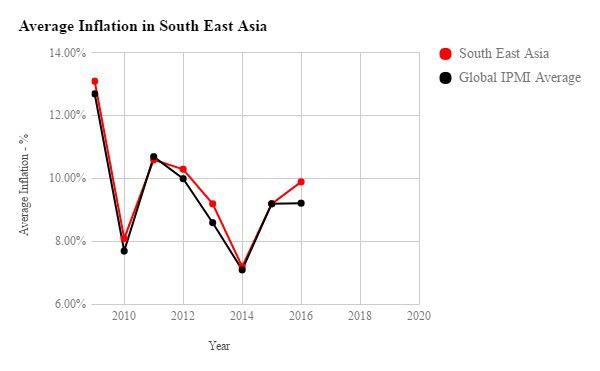 One of the more interesting findings from the report focuses on the Asia region which has seen a higher rate of inflation in recent years. From the cart above, inflation from 2011-2014 was decreasing, however 2016 saw prices increase by 9.9%. Even more interestingly, the IPMI report shows that Asia’s average increase was above the global average for the year, which was 9.2%.

Of the countries included in the focus, the two highest insurance price movers were Hong Kong (12.1%) and China (12.06%). Both had IPMI increases higher than the global average, and in both countries the behaviour and incomes of the people had a large part to play in the rise. Singapore also posted an above-the-global-average inflation increase at 11.2%, bolstered by its booming medical tourism industry and government initiatives.

By way of contrast, the countries of Thailand, the Philippines and Indonesia all had IPMI rates hover below the 10% mark, with Thailand and Indonesia showing signs of their inflation increases lowering from previous years. Again, the movement of people as a result of global economic pressures has likely meant many of the purchasers of high-end insurance policies have moved elsewhere.

Looking at the future of IPMI inflation

In addition to the four strong drivers of insurance inflation discussed above, there are three other trends that look set to change the global cost of insurance in the future:

What else can the IPMI report tell me?


The annual report expands on many of these trends and regional impacts that are affecting Asia and the world. In particular, there is discussion regarding the IPMI rates of both the Middle East and the Rest of the World, and an in-depth look at the way in which the Dubai Health Authority mandatory insurance law changes have affected Dubai.

The takeaway for many readers will likely be an understanding of why their premiums change year-on-year, and just what they can expect in future; whether they’re an individual or family insurance client, or you’re the HR manager of your company looking at your group policy. The insurance inflation analysis provided by the IPMI report can help you make better decisions about your insurance in future.

Pacific Prime is an expert global insurance broker that has been operating for more than 15 years. Headquartered in Hong Kong, it’s team of advisers and marketers work hard to ensure they maintain their reputation for simplifying insurance.

Border Hop Between Hong Kong & China (A Day in the Life)

Using a Hong Kong Company for Your Chinese Factory