I remember when I first boarded the plane in Newark Airport back in 2007. I was heading to Hong Kong and had the idea in my head that half the people would not understand English. Not sure where I came up with this assumption. I even remember talking to my friend Shwinn on the phone as I was boarding the plane – she was amazed I was going to China and had no idea how to speak Chinese!

She told me that she was also a bit embarrassed as a Chinese born, American raised girl that her Chinese wasn’t as good as it should be. During our chit-chat, she said my Chinese would be better then hers by the time my trip was over. I wanted to chat on this more, but the stewardess was threatening to take my phone if I didn’t power off.

It was my last conversation before landing in “big bad Asia”.

Lucky for me, I could more than “get by” with just speaking the English language.

The Spread of the English Language Gives Us Advantages

As an American, or a native English speaker, we have a huge advantage when doing business overseas. That is, everyone speaks, or WANTS to speak in English.

Hong Kong is no problem at all to only speak English – everyone there speaks English unless you go deep into Kowloon or New Territories district. The educational system has had English in its curriculum for decades.

Where many expect you to need Chinese is in Mainland China. Yet, when I first stepped (well, drove technically) into Mainland China via Shenzhen borders – I was pleasantly surprised.

So many people speak English! Surely not as many as in Hong Kong, but in this rapidly growing city more and more local Chinese are “brave” enough to speak English to you. Especially the customer service based staff.

For years I stayed in China and didn’t learn much Chinese language skills at all. I was able to get by with the basics such as directions (or even just pointing in taxi cars and showing the map) and food ordering. The rest I hired a translator in my company to help get things done.

There are plenty of English speaking staff in China who can help you fill the gaps in your daily work and personal life to help you operate purely in English language.

Friends back in America are amazed that I could just hop on a plane and fly to China without even taking a single Chinese language course. I never even thought about it, as an entrepreneur I always just stayed positive and realized I could figure it out as I went.

And as I have traveled to various countries in Asia and around the world, you really can get by with English only. The spread of the English language has been so powerful that almost every country has embraced it as their international language for doing business and travel.

So many people are looking for a reason to say “I can’t do that”. They want to say: “I can’t come to China and do my international business, I don’t speak Chinese”. I don’t have time to learn the language.

While there will always be people in the world who look for any excuse in the book to avoid taking a chance and making something happen. Well you can cross off your excuse list needing to learn Chinese.

Many Chinese business owners and citizens accept that their language is difficult to learn, and have automatically programmed in their brain that a foreigner more likely than not won’t be able to communicate with them in Chinese. They will hire people on their team to speak English to you if they themselves cannot.

Factory owners have been taking up English courses more and more lately, so you may get lucky and find the “big boss” can also speak English to you directly when doing business. Worst case if you will need to talk to their manager or their sales staff in English and they translate over to them.

In any regard, use the fact, the acceptance, of English as the official global business language to your advantage. It’s one less excuse you have for making big moves in your business and your life. Go global. Heck, not just for Chinese business, but business anywhere.

I felt guilty after a while. I was skipping some of my Chinese tutor classes (Melissa my first Chinese assistant taught me for an hour a day after lunch). I felt I was too busy to learn Chinese and had to focus on business.

I regret that now. After being in China for 6 years I finally committed myself to learning Chinese. I had tried on and off before – but really put it into my daily habit about 6 or 7 years into my China business career.

Sure, of course I wish I started earlier.

But I didn’t know how long I would stay in China. Didn’t know if China business would really be part of my career path long term.

So while I don’t want you to have the excuse of not speaking Chinese as a reason not to do business in China. Once you do commit to coming to China and doing some business,s you should pay attention to learning the language.

It’s not a waste of time. Even if you go back to America or your home country – Chinese are traveling around the globe. When I was in New York City on a visit, I talked to some Chinese tourists in Mandarin and they were totally shocked. It’s a fun little bar trick too, ha!

So while the spread of English has allowed us to do business around the globe without needing local spoken languages. If you’re serious about it for the long term and want to impress the people – learn the local language.

Another Advantage of The Spread of English – English Teacher Jobs

While I have to say, being an English teacher overseas gets mixed reactions, it is definitely a good source of income and to bootstrap your startup.

Because English is the international language of choice, people in China and other parts around the world are dying to learn English from native speakers. You need some part time income while you come to China? Getting a job as an English teacher is always an option. And it pays well.

Just don’t let yourself get lazy and comfortable. Stay focused on your business goals and dreams. Use the off time to build your business. Talk to factories, get new clients and make business happen.

But of course, if you’re a Native English speaker in China, you will always have the fallback to get a teaching gig and cover your expenses and then some. Just don’t get into the bar scene and party and drink your savings away with the other English teachers. Take this opportunity to build up a good savings to grow your global business.

Just because you may not be able to travel to China doesn’t mean you can use this to your advantage. I remember back in the early 2000s I was afraid to even try to email or contact a factory in China. I figured they would not be able to read my email and reply.

I was so clueless! So I didn’t tap into that advantage of getting better prices of my products and a global competitive advantage until later. But once I finally sent those emails out to factories, and got replies, in “decent” English – I was amazed.

It is possible to do it! You may need to stay up late and do a Skype call or chat with a factory or potential customer (if you’re brave enough to try to sell to China from overseas), and maybe you’ll never even need to travel to China.

But keep in mind that English has spread all over China and the world – so don’t be afraid to send an English email to someone in another country. They will be glad to get it. They want to do business with you. They want to use their English skills (that they probably paid a lot of money for) to earn new business.

So if you’re not doing it already – reach out to factories and distributors in other parts of the world. Send that English language email. Maybe keep the words on the simple side to start and see how good the English reply back is.

And if you’re really brave, call them! Just be patient and speak slowly. It can be quite the adventure and you feel like you just traveled the globe right from your laptop!

All the best on your international business endeavors. If you’d like to connect with other global business enthusiasts, we have a private member’s club, learn more about how to signup here. 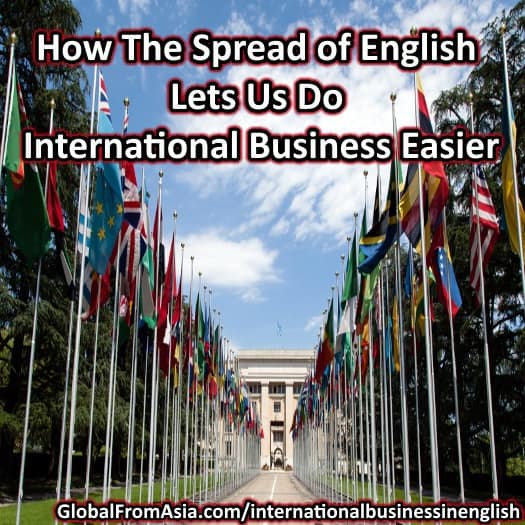 Why Should Food Entrepreneurs Sell on Amazon?

What’s Been Happening At Global From Asia