The global economy faced some major headwinds in the year 2019 that sent ripples to local economies. There were countries that felt the downward pressure, then there were those that just navigated their way through. A more positive growth is seen though in the year 2020 and one of the countries that is seen to be picking up is the Philippines.

You may know of the Philippines with its white sand beaches; palm trees; blue, pristine waters. But, there is a gateway to all of that – one that you shouldn’t miss either. It’s where the action starts and the economy is centered. Welcome to the capital – Metro Manila!

Global From Asia’s Michael Michelini will be in Manila for about 6 months to work closely with Alpha Rock Capital, an online acquisitions firm where he is the Director of Business Development. You might be thinking why, of all other Asian countries and other more developed cities, do business in Manila, Philippines?

Then again, why not? The International Monetary Fund (IMF) projected that the Philippine’s economic growth will rise to 6.3% in the year 2020 from the 5.7% in year 2019. It is a promising outlook for businesses globally that enticed investors to do business here and set base in the capital, Metro Manila.

What To Know About Metro Manila

If you’re determined to take advantage of this development, you have to know first what to expect while being based in Manila for a long time. You may have heard a thing or two about this Philippine capital but knowing more will be helpful. Here are more things that you must know:

Metro Manila or the National Capital Region as it is officially known is composed of 16 cities. This is the seat of the government and the center of economy, finance, social services, culture, education, media, entertainment and everything else. Most businesses that are operating nationwide often set their head office here. Foreign conglomerates that also want to do business in the Philippines also base their center in the capital region.

Manila, or Philippines, in general experience 2 basic seasons – wet and dry. It has high temperature, high humidity and abundant rainfall. The dry season falls late in November until the month of May and is further divided into two – the cool, dry season from November to February and the hot, dry season from March to May.

The coolest weather is experienced in January with temperature averaging at 26 degrees Celsius. Still not that cold but there were times in the past that the temperatures dropped to 20 – these were unusual though.

Summers in Manila can get very hot. Temperatures can get past 30 degrees Celsius. The highest was recorded at 38 during the summer in 2019. Hot right?

The wet season which falls in June to October can get very wet too. Weather still feels hot but expect rain and even typhoons. Be on the watch too since a lot of roads in Manila can get flooded.

The Philippines wouldn’t be called the Social Media Capital in the world, for nothing. Almost all establishments particularly in the metro offer free wifi. Hotels, restaurants, cafes, offices – wifi is a must. A wifi-password is part of the menu or an amenity for guests. If your business is online then this is a welcome treat for you.

The internet though can be intermittent and oftentimes really slow, especially if you share the connection with hundreds of others. You can get a pocket wifi or a local SIM – service providers sometimes offer unlimited internet for a good number of days.

4. Almost everyone can speak English

You wouldn’t have to worry about the language barrier since the locals here can speak English and many of them can speak English well. From the airport personnel, to taxi drivers, hotel staff, random locals you meet in the street – they know english! That’s good news for you.

English is one of the media of instruction in schools here. Before there were developments in the education system of the Philippines where schools are required to use the mother tongue in teaching, a Bilingual Policy was implemented. English and the national language, Filipino were widely used.

Filipinos are mall-loving people hence it is no surprise that malls are mushrooming in different cities and towns. In Metro Manila alone, there are more than 20 major malls or shopping centers and more than a hundred smaller shopping centers or lifestyle malls.

Of the Top 10 largest malls in Asia by gross leasable space, 3 are from Metro Manila – SM North Edsa in Quezon City, SM Megamall in Mandaluyong and SM Mall of Asia in Pasay. If ever you feel bored, go to the mall – there will always be one near you.

6. Traffic congestion can get worse

The traffic navigation app, Waze, reported in year 2019 that Manila’s traffic congestion may be the world’s worst where a motorist takes 4.9 minutes to travel the distance of 1 kilometer. With that data, it could mean that Manila’s traffic is worse than Bogota, Colombia’s and Jakarta, Indonesia’s.

What would normally take 15 minutes to travel can take longer, about 40 minutes. More time is wasted in the gruelling traffic. So, if time is of the essence, then you have to carefully plan out your schedule, better yet, reside nearer to your usual destination. Walking might get you there faster.

7. Take the Metro Rail Transit (MRT) or Not!

If sitting and waiting in traffic is not a welcome idea, then there’s another option – the MRT. Taking the MRT may be the fastest and cheapest route to your destination. There are 12 stations within Metro Manila taking you from North Avenue in Quezon City down to Taft Avenue in Pasay and vice versa. Around 15 trains are running the system.

But don’t rush to the nearest station just yet. You would think that It could be the best mode of transportation and so does everyone else. Don’t get caught up during the rush hour – it can get chaotic. Lines can stretch to tens of meters especially if a train or two can’t run. The coaches can get jam-packed that sometimes it is difficult to breathe. The best time to take the train? Before 6 am and after 9pm.

8. Merienda or coffee break is a daily ritual

If you’re working in an office, expect a surge of people getting out or going down around 9am to 10am and around 3pm to 4pm. They’re not loitering, they’re just out to get their “merienda” or snack. You see, the Filipinos eat 5 meals a day – breakfast, morning merienda, lunch, afternoon merienda and dinner. Filipinos love to snack – a ritual handed down by the Spaniards.

So the next time you see, don’t think that an evacuation is going on. You can either go with the crowd and grab your merienda too.

9. Nightlife is thriving and vibrant

Manila houses hundreds of clubs and bars owned by locals or under a partnership with expats. There are popular spots for a particular crowd. The young-ish, the yuppies and the young once; expats and locals are patrons to an exclusive club or bar. Amidst the food and the heavy drinking, one thing that keeps the nightlife in Manila vibrant is the booming live music scene played in all clubs and bars. So, if you get bored in your room, try going out and check out the night scene.

That giant bee colored red and white is the Philippines’ national symbol of delicious, affordable and fast food. Jollibee, the multinational Filipino fast food chain now has over 1,200 franchise outlets worldwide. But everything started in Manila.

It started out as an ice-cream parlor in 1975 in Quezon City and expanded to other meals and sandwiches and by the end of 1978, Jollibee opened 7 branches in Manila. While the company has established its presence in different countries worldwide, Manila will always be its home.

Is Metro Manila a No or Go?

This Philippine Capital may not be lined with white sand beaches or tropical palm trees. But, it sure has its own beauty. It is the gateway to the greater Philippines and the center of every economic and social industry in the country.

If you are to ask if it’s a no or go, we say, Go! But of course, it wouldn’t hurt to know what you need to prepare before going there. Mabuhay! 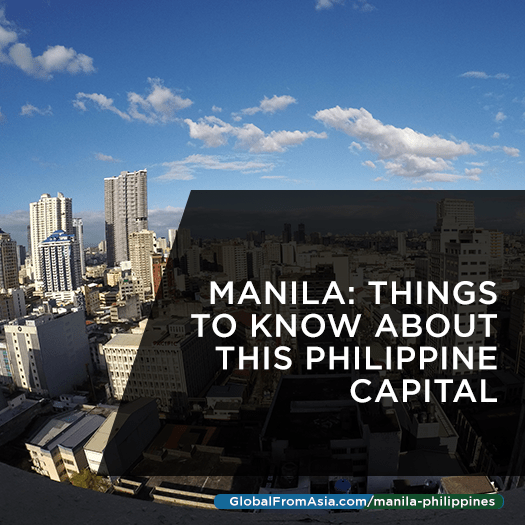 Experience Returning To China During Coronavirus with Michael Michelini

Can You Do More Than 1 Business in a HK Limited?