Well, the election is finally over and Donald Trump is the next US president. I have been getting overwhelmed with questions and reading tons of social media – both English social media and Chinese social media. Plus hearing perspectives from my wife on this has been fascinating.

Today I’ll just spark some thoughts on what this can mean for people doing business with China, Hong Kong, and other parts of Asia.

Trump To Impose A 45% Duty on Chinese Imports?

A ton of Chinese friends, as well as Amazon FBA business owners have been asking if Trump will really put in place a flat 45% import duty on imported goods from China.

Chinese factory owners are fearful of this, as obviously US market is the biggest buyer in the world. It is hard to believe that this duty could be put in place, it would cause quite an uproar in China for sure.

Heck, maybe I’d have to move!

Already some friends who help people immigrate to America have seen their inquiries decline and current applications be pre-maturely cancelled. The thought it immigration policy will get much harder, and at the same time, the glory of being an American may not be what it once was.

I know quite a few Chinese business friends who earn their living helping Chinese buy American real estate and immigrate their family there. Or do other EB5 style investments in America for a green card.

The uncertainty by itself will slow down the lead flow for these business owners.

We have been watching Philippines change their support from America to China. The predictions I hear is that Donald Trump will pull out more overseas military – one being in Philippines and the South China sea.

This means, China will have more and more power and influence in South East Asia (well, it does already). With all those new islands in the works, Chinese political and military positioning will most likely strengthen.

Even Harder For Americans to Do International Business

This is the tough one for me. While I have been mostly working with non-American clients in my agency – it will be even harder to help Americans to do business in Hong Kong and other parts.

I have a few friend who have a Hong Kong company, but just struggle to get approved for a Hong Kong business bank account.

Now For a Few Months of Speculation and Waiting

Well, now that the election is over, it is “lame duck” time. Obama is still president until mid January. The social media and media in general will keep speculating about what is going to happen, and nothing will be able to move forward.

Some of my friends I have sat down with expect businesses to still “wait and see”. Especially in China – they’ll wait until AFTER Chinese New Years to make significant business investments. One of my American friends in Hong Kong is stressed out. He is raising money for a manufacturing related business. He’s meeting an investor later this week, a Hong Kong family fund. He has this fear that they will tell him they are too unclear the future of USA and imports and international business to make a new investment now. That he has to wait until Feb / March 2017.

That will crush his startup, he needs the investment in a couple months, not a half a year (after the discussions, and settlement of the funding).

Your Thoughts on USA Business + The Rest of the World

I try to not get too political on this blog. But business and politics often overlap, especially when a new president of the United States comes into play. And such a drastic swing as well, a more business-minded, Republican party president, with a majority of Republicans in both the House and Senate.

For sure this is going to be “interesting.” Many of us say this will be like one of Donald Trump’s reality TV shows – “Make America Great Again” the reality TV show – and it for sure is – REALITY. 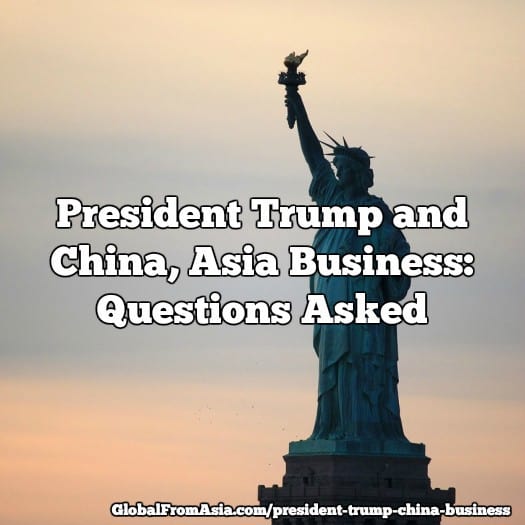 Dealing with Receipts & Bookkeeping for Your Business, In or Outside of Hong Kong with Michael Wood

Finding Your First Product Category To Sell on E-Commerce

Global Health Emergency and its Effect on Global Economy

What is a Business Exit Plan and Why Develop it at Day One?

The Challenges of Operating A Hong Kong Company