I had the pleasure of being invited as press to the European Union Chamber of Commerce in China event in Guangzhou on Wednesday April 12, 2017. It was about their newly released industry report titled “China Manufacturing 2025: Putting Industrial Policy Ahead of Market Forces”.

The presenter was Mr. Joerg Wuttke, the President of EU Chamber. There was a lot of themes and highlights he spoke about, relating to the industry, the global environment, and today I will take some of those highlights.

If you would like to download the online version of the report, you can do so here

Unequal Exchange of Investment Opportunities between Europe and China

His big point was that Europe is an open and free market, for all industries. He explained that Chinese companies have been enjoying the ability to purchase assets and companies throughout Europe in all sorts of industries. There hasn’t been any rejections of these mergers and acquisitions by the government bodies due to it being a Chinese buyer.

But he stated that it is not reciprocal. He explained how in China, there are numerous industries where European, or any foreign company for that matter, are forbidden from making mergers and acquisitions. He explained that this is actually holding back the further growth and expansion of China’s own economy, as these foreign acquirers will bring more innovation and education into the Chinese workforce and system in general.

As the trend of Chinese companies buying up foreign assets, he said that they often notice the Chinese buyer doing this as a one stop solution. That now that they own this foreign company,, their problem of lack of innovation and creativity will be solved. But Joerg went on to say, you don’t just set it and forget it. You need to continue to manage this business you purchased. You need to integrate and adapt the businesses together. That simply purchasing a foreign company and thinking you are done is a plan for failure.

Joerg then went on to explain that China was built on cheap manufacturing labor. And we all know that automation in factories and manufacturing is coming. The Chinese workforce, and education system, must adapt to automation. Sure, every government around the world is afraid of those citizens in the workforce who are not qualified and ready to work in a more technically advanced working world – but that doesn’t mean you hold back innovation.

So it really starts at the education system. He explained that in Europe, there is this middle level of education called vocational schools. This is where people learn more applicable skills such as CAD, machinery, and other specific skill set items. He suggests China work on building out a vocational education system that is cheaper and more widespread to the general population. This way you can more quickly give opportunities to everyone in China to upgrade their current career. He even said that many in Europe would be more than willing to share and assist in building out such a vocational education system throughout China.

What If China Doesn’t Open Up These Investment Opportunities to Foreigners?

At the end, we had time for some questions and answers. So I had to ask – what will the European Union do if China continues to restrict foreign investment to various industries in China. I don’t like to be negative, but I think it is helpful to get some insights and perspectives. Joerg explained that there is already more and more discussions and talk in the media and general population about these Chinese acquisitions. As the trend of Chinese buying overseas assets continues, the spotlight on the inverse will continue to be highlighted.

He didn’t want to use the word protectionism, but he explained that if this rapid overseas acquisition trail continues, more research may be done. If it is determined that these private Chinese companies are government sponsored or financed, the European Union will have to dig deeper into it. That there needs to be balance and open trade and opportunity on both sides in order to create a fair global economy.

For examples look back to Japan and Europe. He joked that most of us are too young to remember those days, but there was a lot of pressure on Japanese companies expanding to Europe, and even though there was a more formal business relationship between the regions. He said that China has an even less formal arrangement with Europe on these policies, so if things don’t start to balance out soon, the pressure will get stronger and mergers and acquisitions in Europe from Chinese firms may start to get the rejection stamp instead of approval.

What Are Your Thoughts on the China and European Union Investment Situation?

As China continues to expand globally, how should governments get involved in the approval and rejection of mergers and acquisitions?

I also suggest you check out the EU Chamber’s Industry report on China Manufacturing 2025!

Let me know your perspectives in the comments below. 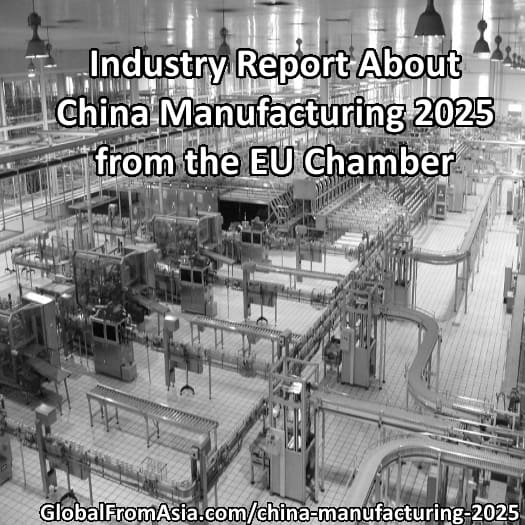