How Much Time Does It Take To Buy From China and Sell on Amazon FBA?

A common question, and on this Thanksgiving holiday I thought I’d be solo on the mic and share. I was talking to a consulting client about how much time it would take him to find a product in China and get selling on Amazon FBA in America. I wish, as everything, this could be a simple answer but there is the annoying “it depends”. In today’s E-commerce gladiator episode I go through the thought process of how much time you should budget for it.

And for those Americans out there listening – enjoy your Turkey! And I think basically everyone in the world has Black Friday now?

Please show support of our GFA media sponsors as they make this podcast possible to be free!

Thanks so much for listening – whether this is on black Friday 2017 (when we release this episode) or it is years later – believe until we have 3D printers at shops across America this painful process of the “dance” with a Chinese factory will exist for e-commerce sellers. I’d love to hear your thoughts and strategies for buying from China and dealing with manufacturers, try commenting below 🙂 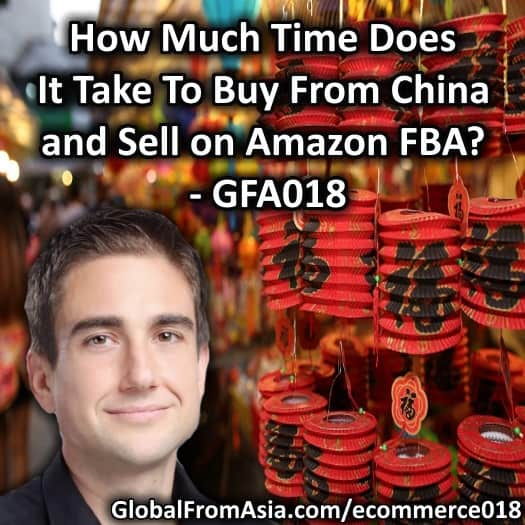 Welcome to the Global from Asia Ecommerce Gladiator Series where you can follow along the progress of setting up a Cross Border Ecommerce business from start to finish. Hear insights of real product research, Amazon FBA, China manufacturing, branding, marketing, and all the blood, sweat, and tears of building a global business from Asia.

Today’s podcast is brought to you by Aureliapay. I use it personally for sending money to my Chinese suppliers from Hong Kong. It’s a cross border payment solution between China, Hong Kong, and Southeast Asia. So, if I need to make a payment to a Chinese supplier, I just hop online to place the remittance, pay to the Aureliapay Hong Kong based big account and Aureliapay will settle RMB within the same business day. So, check them out online at www.aureliapay.com A U R E L I A P A Y .com or check them on their link at our show notes.

Plowing Through Between Western and Chinese Holiday Seasons

Amazon Japan: What It Takes (Plus Bonus Sales Channels) with Nick Katz