So I had the lucky opportunity to go to a fireside chat with Eric, the founder of Pebble Watch. If you don’t know what Pebble is – I guess you haven’t been following the crowdfunding scene! They are the poster child of the Kickstarter crowdfunding platform, raising 80 million US dollars on their kickstarter campaign!

I wore my original 2012 watch from Pebble and it definitely got the attention from Eric! Clipped a video part from the chat in my video blog, but today you can read some of the highlights I picked up from listening to this epic fireside chat. Bay Mclaughlin from Brinc.io was a great host, and we had some insightful audience questions. Just picking a few of the many value bombs I got.

The Biggest Competitor is Yourself

Its rarely your competitors. He explained that as a small startup, the last thing you need to worry about is someone copying your idea. You are so early stage, and still figuring out what you are working on and the next version that if someone were to copy you, they would go in a totally different direction in their iterations. So many founders want to be secret about what they are working on, or are afraid of the press. But you need to get out there and do customer development.

This is most important part. For a crowdfunding campaign, but also for anything for that matter. A brand is a representation of your community. What people think of when they see your logo, your product. When they are touching and feeling it.

He was amazed that people would buy the Pebble, and then give so much feedback and ideas. He was getting people paying him, essentially, to beta test and help iterate his own product. That is a valuable and strong community. Seems Pebble did a great job in engaging their community, and letting their voice be heard. Not only heard, but also to have groups and ways for them to share more openly.

You have nothing to hide, but have early adopters sign an NDA


Do not fear competitors. Which is something we covered above. Yet at the same time, when he was talking about his early customers who were red hot to give him and Pebble feedback, he did ask them to sign an NDA. He didn’t use the word ambassador, but that is what I would call this program. He gave them special insights on the product development, early access to features and versions of the product. But he did ask these people to sign a NDA (non disclosure agreement). This was so that there was a more formal agreement and relationship bonding these super users with Pebble.

One cool insight was how it seems hardware investors are pushing a lot of their portfolio investments, or potential investments (entrepreneurs) to do it all. To make a product, make a Saas (Software as a Service) addition, the community of developers building on it, accessories, basically the “whole 9”.

Bay was also saying this is the pressure from investors these days – they want to see all these various monetization components in place or on track to be put in place. Maybe the worry is that “one hit wonder” of a hardware project that fails to make a new hit after its initial launch. Which is something I can understand – if you are launching products – you get that initial bump and then you have to work on pushing out the next version. We can even think of Apple with their iPhone 2, 3, 3G, 4, etc. The pressure is always to have the latest and greatest new version or product.

Eric’s response was interesting – he said you need to be strategic and think about your business model early on. From my own side, I was surprised as I thought first the idea is to make the product and then think about monetization later. But he says you, as the entrepreneur, have to have your strategy for making money on the product. And most importantly, don’t let the market or the investor community push you to develop a business model that you are not comfortable.

For Pebble, they had a few of these business models in place, but mainly made money on their new product releases – which leads nicely into the next point.

For monetization in a hardware product, you have uneven bumps in your revenue. He said basically it is around 2 time frames, your product launch, and Christmas sales. That is it – you have Christmas and launch. DO NOT put those dates together – meaning, release your new product in the summer – or spread far from Christmas – and then have 2 launches – one for your new release, and another for Christmas. By combining a launch and christmas , you are not doubling your revenue at that time, but basically taking 2 and making it the same size as one.

This point seems critically important and I hope this by itself makes a lot of money for hardware startups!

How to stay motivated in the entrepreneur’s journey

A good question in the audience was how he stayed motivated for 8, almost 9 years. He started out with Blackberry apps in 2008 totally unrelated to the watch that became Pebble.

I loved his answer – no one else will motivate you except yourself. If you need someone else to motivate you to get your work done, then be (or stay) as an employee of a company. The motivation to get something done is critical to being an entrepreneur. But of course we all have that downtrend in our entrepreneur journey. He said one thing he wished he changed was to have worked less and have more social time. That maybe this could have helped a bit more on the pressure and stress of being an entrepreneur.

But that is it – you need to be self motivating to succeed as an entrepreneur. That is also why its important to have a good team in place. He mentioned co-founders, because they also need their skin in the game. 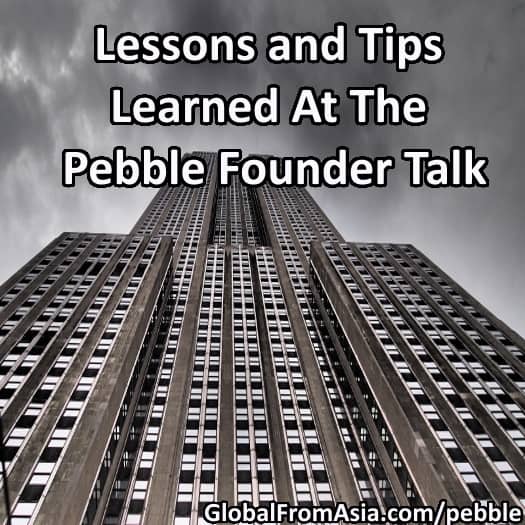 Moving To Mexico: How To Get Mexican Citizenship

Buying a Hong Kong Owned Chinese Company Out of the Box