As more consumers continue to discover the convenience of shopping online, the online marketplace is only bound to get even bigger. This is, of course, good news for entrepreneurs; e-commerce is a virtual goldmine waiting to be explored. In fact, it is a commonplace these days to hear success stories of newly-minted millionaires who owe their good fortune to online selling.

While the online market presents a virtually unlimited earning potential for entrepreneurs, Amazon’s platform makes the journey to success a lot easier for newcomers. With a secure, stable and the wide-reach of its network, the list of Amazon FBA success stories continues to pile up every day.

Get acquainted with a few of these brilliant newcomers and, hopefully, find the right strategy and inspiration for you to forge your own success story.

For those who have just started or are yet to start in their FBA seller adventure, Nathan Walsh’s story is definitely a must-read. In just three months, Mr. Walsh was able to grow his $600 to $6,000, marking him as having one of the most astounding startup success stories on the platform.

Originally, Nathan wanted to start is Amazon business in December of 2016. Unfortunately, at that time, there was a temporary ban on new FBA sellers due to warehousing concerns brought by the Christmas buying spree. But Nathan was undeterred and spent the waiting time productively by immersing himself into the world of online selling, watching videos and reading blogs to prepare himself.

It was a time well-spent. When he eventually started his Amazon business, he was able to sell $15,000 during the first three months of his business after spending only $2,186 on inventory. But that is not that most amazing thing about Nathan’s success story. It might seem unbelievable but Nathan actually started his online business with just $600 capital, and he did it by selling used books that he has to personally source books from locations as far as an hour and a half drive from his home.

According to Nathan, the trick is in research the particular niche one is targeting. In his case, he was fortunate enough to have been stalled into jumping right away that he was able to learn the “nuts and bolts” of online selling by watching videos made by people who have been in the business longer. Also, keeping in touch with the community boosted his learning curve. He joined a Facebook group called FBA Rockstars where experienced members share tips to those new in the game.

While he scours thrift stores in his locality sourcing for used books to sell, he also admits that sourcing them online is also a good way to replenish inventory. He sometimes uses eBay for this and found FB Marketplace to be helpful as well.

But ultimate, there is one advice that Nathan would like to point out to new FBA sellers. In describing the products, he encourages everyone to be as honest as possible. By putting themselves in their buyer’s’ shoes, sellers will ensure that buyers would get what they want. It’s the best way to gain positive feedback from customers and keep them coming back for more.

For those reluctant to join the Amazon marketplace for whatever reason, Nathan says just jump in; “there is a lot to gain and not a lot to lose.”

Marvin’s Amazing Journey From Zero To $10K A Month In Less Than 4 Months.


Here is another story worth mentioning. In this story, an Amazon seller was able to do the unthinkable- turn his business into a $10K per month cash cow.

At the onset, Marvin did not really wish to be tied down to a 9-to-5 office job until he turns 65 years old. True, it helps him pay his family’s bills, but it is not just something that he wanted on doing for the rest of his life. Thus, he looked for ways to build another income stream eventually settling down to being an FBA seller.

After the family’s increasing expenses due to the birth of his third child, Marvin could only spare $500 for inventory. Because he had a background in couponing, he then decided to plunge into the grocery category.

Of course, Marvin already knew how to great deals on grocery items which helped him a lot with profit margins. Thus, with a simple $500, he was able to quickly build a thriving online business with monthly revenues already breaching the $10K mark in a matter of four months.

So how did Marvin make it work for his online business? For this, he offers some practical tips to would-be online sellers.

Marvin considers honesty as very important in growing his client base. He has always been honest in dealing with questions from other people. When asked why he would buy too much of some strange items, he will just explain that “I run a little online resale store with my hubby. We sell things that people may have a harder time finding in their area, and even donate items to charity if they don’t do well in our shop.”

As every salesperson would know, being extra nice and friendly to everyone would go a long way in closing a deal. Fortunately, that holds true even in online businesses as well. In Marvin’s case, however, he cautions that while befriending a store’s management and supervisors is indeed a smart move, reaching out to the other members of the team such as cashiers, stockers, and even janitorial staff, could be beneficial as well. When you treat them with respect and courtesy, they would be the first to let you know of the store’s latest clearance sale and which item you’ll be getting at a big discount.

These stories are just two of the many Amazon FBA success stories out there. They show that, with the right preparation and attitude, even a newcomer in the game can still make it big. 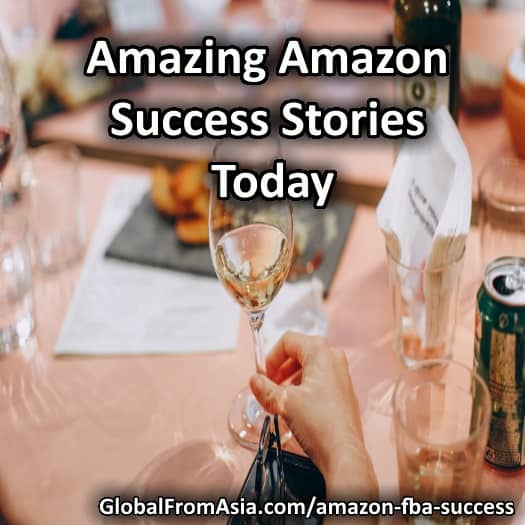 What Are The Top Amazon FBA Brokers To Buy/Sell My Business?

Grinding: From Being An Employee in Russia to Successful Design Freelancer in Europe with Evgeniya Pautova