Today is a special one for me, being an alumni of Chinaccelerator program’s 3rd batch where I started Social Agent and met my soon-to-be-wife Wendy, I get to host a “fireside chat” with Todd and Cyril while Todd was in Shenzhen on a roadshow. Applications for their 5th batch are open for another week so check it out and see if you can Apply your startup in their program today!

Cyril is a venture partner at SOSventures and the founder of HAXLR8R (the premiere accelerator program for hardware startups – Shenzhen & San Francisco), Chinaccelerator (the first mentorship-driven seed funding program in China – Shanghai) and LEAP Axlr8r (building the future of interaction design – San Francisco).
He is mentoring at Techstars and 500startups, an advisor to the Global Accelerator Network (http://globalacceleratornetwork.com/about/) as well as a board member/advisor to a few startups including Leap Motion, Orderwithme, Nextly and gTar. He is the most prolific investor in the hardware space (40+) and has invested on every continent. Via Crunchbase (http://www.crunchbase.com/person/cyril-ebersweiler )

Todd is Program Director at Chinaccelerator. Todd is a serial entrepreneur who has been living in China for more than 5 years. His main areas of expertise are lean startup methods, marketing, and customer development. As the lead evaluator for applicants to Chinaccelerator, he has an acute eye for great founders and scalable, viable startups.

China-Axlr8r is a seasoned incubation and seed funding program based in Shanghai. Promising teams for their fifth class, starting February, 2014 (Apply). Their program focuses on mentorship, the lean startup, and “entrephilosophy”. Accepted applicants will go through an intense 90 day incubation program, finishing with a Demo Day – where many teams find follow-on investment. (Read more about their last Demo Day.) 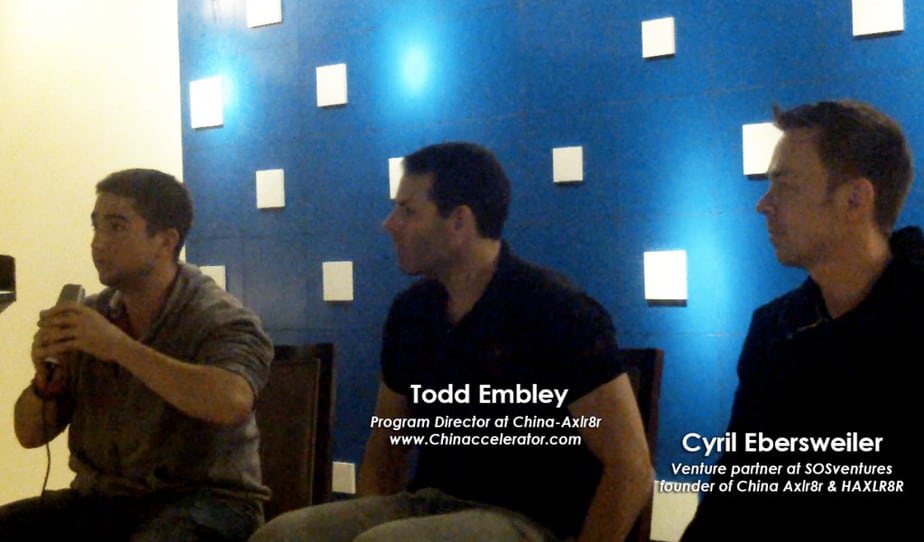 Reader’s comments:Eoin Brown, China – Michael was very considerate, responsive and helpful following my contacting him to discuss Chinaccelerator through a recommendation from a mutual friend. We communicated on WeChat and the phone, during which he sincerely offered valuable advice and direct help in a number of different areas which I am following up with him about. I also found his sohelpful.me profile and business socialagent.me to both be attractive and useful tools which I now plan to use personally.

Coronavirus Impact: 28 Business Experts Weigh In On How The Coronavirus Is Affecting The E-commerce Industry

Overview of Quality Control in China with Andy Church

What Does Brexit Mean for UK and Hong Kong?

3 Ways to Raise Funds & Differences of USA from Hong Kong

Difference Between a Maker and a Future Engineer, in Shenzhen, China with Henk from Trouble Maker