Back on the move – on the cross border bus from Huanggong border to Jordan station in Kowloon. Had a good afternoon of family and rest time during this hyper active trade show season.

I just don’t know how everyone keeps up here – I’ve met a bunch of you guys and you’re hoping from Global Sources to HKTDC show to Canton Fair. There is a meetup after meetup and guys like Chris Davey will have just done a massive one in Guangzhou yesterday (Monday night) with another next week at McCauleys pub. On Mon May 2nd in the evening during Canton Fair Phase 3 so stop by and say hi to Chris and the gang there.

Now this lead’s me to this week’s show – Dr Neale O’Connor, he is such an upbeat guy and full of energy! He was on with Mike Bellamy’s show, episode 112 before we took a bike ride together – and finally we have him on his own show today to discuss China sourcing in the year 2025,

Well, thanks Neale, really a pleasure to have you on. Fascinating talk, and I have been chatting to you after the interview, and you’re still cranking away at supplier interviews, it’s great. 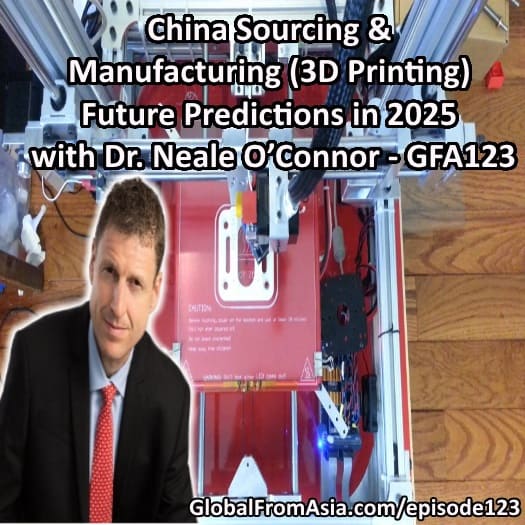 The Final Episode of E-commerce Gladiator

Owning Your Own Data and Identity, Future of Ecommerce and Social with Valto Loikkanen

Choosing a Product Category For Your Import, Export Business in China with Deepak Madnani