In an attempt to inform people and spark conversation – I am alarmed at some messages I have been seeing in private Wechat groups. There have been cases of Amazon FBA accounts being shut down (well, honestly more and more lately) for logging in continuously from China, as an Overseas seller.

Yes, you heard it right! The seller which got their account shut down explained that in the email it asked the seller to provide a proper Chinese work permit that gives this business owner the right to work from China. He does not have one, as it seems he is living in China on a business visa (or maybe worse, a tourist visa!).

Yet, that is what countless internet entrepreneurs have been doing, in China, as well as around the world.

Today, want to discuss what this could mean, and ways you can prevent it from happening.

Where You Work = Your IP Address?

In the email from Amazon, they know he is “working” in China because he is logging into the Amazon account with a Chinese based IP. An IP address is basically a server location of your ISP (Internet Service Provider) that then loads other websites on the world wide web. When you login to Amazon, or visit any website, they immediately know the IP you are requesting their information from (downloading the images, etc).

Many internet entrepreneurs in China know that Facebook, Google, and many other websites do not load (this very blog often does not load in China) – so many have learned to use a VPN – which changes your IP and allows you to surf the internet as if you were in a different location.

Maybe this entrepreneur should have been using a VPN to log in to his Amazon FBA Seller Central Account. Many VPNs allow you to pick which IP address (country) to use when surfing the web. So if you are a UK seller account, you could pick a UK IP address from your VPN location.

**Note** VPNs are not magic. Many times, Amazon and other web companies can detect this IP address is from a VPN company. Or, if many other sellers are logging in using the same IP address (same VPN) then it could cause confusion to Amazon that there are many seller accounts using the same location, violating policies.

Another Note – **remember where you are using a VPN where** – I have had hosting accounts shut down on me as they saw me as a “high risk” or “fraud” because I was logging in to the hosting account from Europe, USA, China all within a span of an hour. I remember having to call their customer support and explain “I live in China, the internet is blocked here and I need to use a VPN in order to access a ton of websites”. They went through some other security questions and precautions for me and then re-activated the account.

So, use a VPN at your own risk.

So, if this Amazon FBA seller in China were to want to reactivate this account, he would have to show Amazon his work permit.

So one asks, how can he get a work permit? We have discussed various visa levels on the blog, to get a proper work permit we need to either establish our own business in Mainland China and then employ ourselves, or get hired by another company as an employee.

Then, this would mean reporting a salary to the Chinese government and paying your income taxes here. I opened a WFOE in Shenzhen back in 2008 and have been on a work permit since shortly thereafter, and that is what others should do long term.

But really there hasn’t been much enforcement. Maybe this is a sign of changes to come? Many have been using the new 10 year business visas Americans and many other passport holders have gotten to travel in and out of China with ease.

Is this Because Amazon Has a China Operation Now?

Discussing this matter with a few smart people, they have suggested it could be due to Amazon needing to comply with Chinese tax law. Amazon has been steadily increasing its presence in China, both for getting more sellers on the US and overseas marketplaces, as well as building up its own domestic Chinese e-commerce.

By having a local presence in a country, companies must comply with requests from the government on taxes. I can picture the Chinese government asking Amazon to see who is selling overseas from China, and tell them how the money is flowing.

We have had podcasts in the past about Chinese sellers distributing directly to Amazon USA, maybe after all these years the Chinese tax authorities want to get their piece of the action. This logic does make a good case for why this Amazon seller had account problems while selling overseas from a Chinese IP. These tax departments want that work permit, which verifies this person has a company that is paying at least some taxes to the Chinese government.

Complex stuff, right? Then how about taxes in USA, or whichever country these products were sold? And then there is the Hong Kong company the seller may have. When you start considering the customer location, the operations location, the banking and corporation location, you can get your head to spin. Food for thought, but each government is more and more actively thinking on how to claim their taxes in this new “digital nomad” world.

But, Why Should Your IP Address Matter?

Then, the discussion goes to – why should I have to use VPNs to “fake” where I am logging in from so that I don’t get banned from Amazon from working from a different location? Isn’t the whole point of doing a “location independent” business about working anywhere from your laptop in a coffee shop and wifi connection?

Times seem to be changing. Governments around the world want to collect their taxes, and are probably the ones putting pressure on Amazon and other marketplaces.

A Small Hint At a More Challenging Future for Digital Nomads?

In my perspective, 2016 has been a wild year for global business and trade. We had Brexit, and then a Trump victory. FATCA has been around a few years but is still putting new pressure for Americans abroad.

What do these governments want us to do? All return to our home countries and do domestic business?

I just feel the tug of war between internet entrepreneurs and governments with banks. 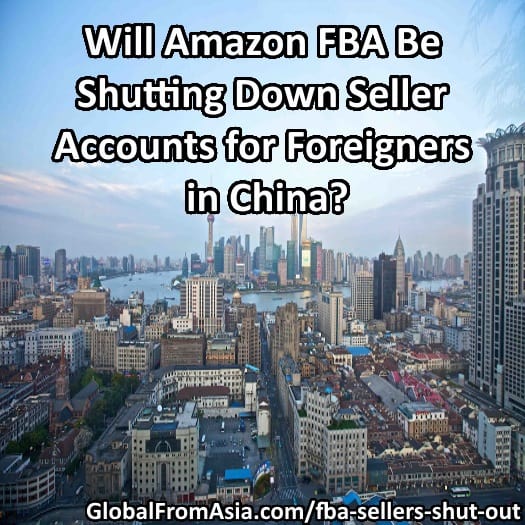 Why You Need a Hong Kong Company Credit Card

Asian Countries That Benefit From the US-China Trade War

How To Lose Your Staff in Asia (and Globally)

7 Comments on “Will Amazon FBA Be Shutting Down Seller Accounts for Foreigners in China?”