I have been contemplating if I should say anything about the Occupy Central protests that have been happening in Hong Kong for the past couple weeks, but as a podcaster and blogger about Hong Kong business, how can I possibly continue to keep my mouth shut? The main reasons I have stayed silent this long is that I live in Mainland China with my family, and I am not sure how the protests will affect business and that is what I blog about–business not politics.

What is Occupy Central?

The best definition I can find is from South China Morning Post:

Occupy Central is a civil disobedience movement which began in Hong Kong on September 28, 2014. It calls on thousands of protesters to block roads and paralyse Hong Kong’s financial district if the Beijing and Hong Kong governments do not agree to implement universal suffrage for the chief executive election in 2017 and the Legislative Council elections in 2020 according to “international standards.” The movement was initiated by Benny Tai Yiu-ting, an associate professor of law at the University of Hong Kong, in January 2013.

SCMP has done an amazing job covering all the events, and I have been using that as my main source of news and updates as the movement unfolds and develops.

In more “layman terms,” I see Occupy Central as the younger generation seeking the absolute right to vote for any leader, not a leader from a group that the Beijing government has pre-approved. As Hong Kong has transitioned from a British colony that was handed over to Mainland China in 1997, there have been some tensions about how the full transition would work out over the next 50 years.

So, this tension finally hit a breaking point and now we have this “Occupy Central” movement.

How Has Occupy Central Affected Business?

You may be in your home country wondering how this is affecting the economy. Most have probably seen the extensive photo coverage online of empty streets in downtown Hong Kong, so traffic has been an extra headache in the region. Fortunately, the MTR (metro/subway) has been operating fine but has been completely jammed. This brings up a few points for discussion.

This has to be the hardest hit sector. The protests started just at the beginning of the Chinese National holiday (Oct. 1 for a few days), and a lot of Mainland tourists come to Hong Kong to go shopping and generally spend a lot of money during that time!! Due to the protests, the Mainland government started restricting Mainland Chinese tourists from traveling to Hong Kong. This will directly hit the pocketbooks of shop owners.

Also in the protesters areas, the shops were forced to be closed completely–obviously hurting sales. 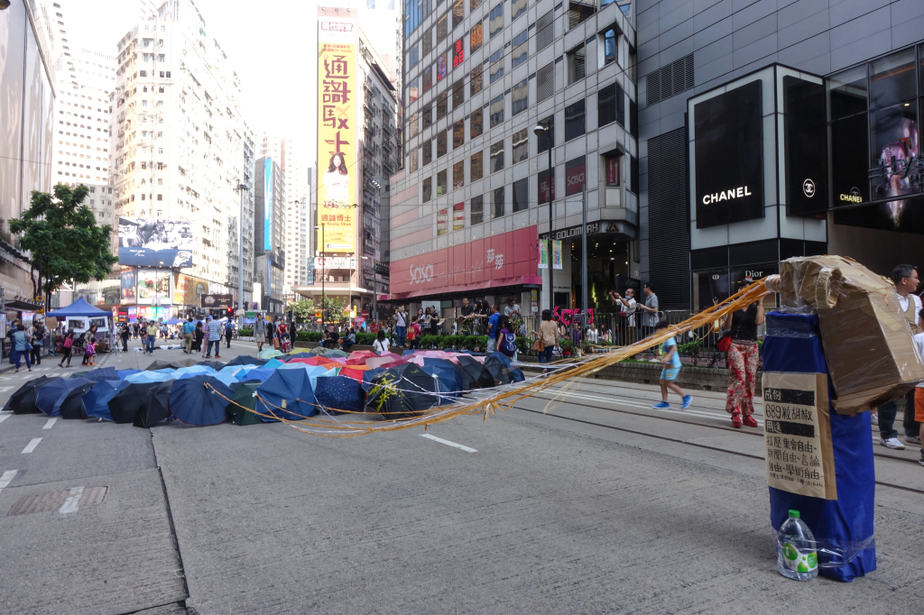 Image: A public art installation was displayed on Hennessy Road in the Causeway Bay district of Hong Kong on Sunday October 12, 2014. It showed a bottle of pepper spray attached with strings tired to umbrellas, which symbolized police pepper spray against protesters using umbrellas to dodge the chemical. Photo by Wendy Tang

The Hong Kong airport is far from the movement, and the airport is extremely efficient as usual. So no delays or cancellations there.

I have met a few business travelers visiting Hong Kong during this time, and while they see the protests in various sections of the city, it hasn’t affected them in doing business and getting things done.

But Fewer Travelers from China

Even I cut the number of times I would go into Hong Kong during this movement. I had a day or two planned to go, but that first week or so I really didn’t know what to expect, so I pushed back my meetings and other plans til the next week. A few friends in Shenzhen also delayed their business trips to Hong Kong.

We are in the Fall season of the global import and export trade shows now. And those are operating as normal. I personally haven’t gone, but a ton of my sourcing and trading friends have been going without any issues.

I have talked to some friends who attended some art shows, and wealthy Mainland Chinese buyers cancelled attending and purchasing some art because of the events.

I have had a couple business meetings that turned into Skype calls, as well as some slight rearrangements both at my request and on my counterpart’s request.

Even into the 16th day I had my meeting with a company changed from their office in Wan Chai to a Lan Kwai Fong cafe in Central.

Whenever we make these changes, we keep it business related. I am tempted to bring up what they think of the protests, especially when meeting my local Hong Kong business contacts, but I just keep the meeting on the business side.

There is some tension between the local Hong Kong community about whether this is right or wrong, so as an American outsider, I just stay out of it.

Many of my podcast listeners have a Hong Kong business but live overseas. They don’t seem too concerned and no one has been affected by the protests. Online banking is completely normal, and shipping and logistics are unaffected.

The conclusion is that the retail shops are the most affected, either because they have to be closed or due to a lack of Mainland Chinese customers.

Businesses Have Benefited From One Country, Two Systems

Wikipedia has a great explanation of the One Country Two Systems situation, and I even learned that in Chinese it means “One China, Two Systems,” which seems obvious, but I just never thought of it that way.

As a Hong Kong business owner, I have enjoyed benefits such as Chinese Yuan (RMB) currency in my Hong Kong business account and the ability to deal with a lot of Chinese factories and other businesses in Hong Kong–it is also easy for them to set up and operate there.

Hong Kong has acted as that bridge between Mainland China and the world.

There are a lot of Anti-Occupy groups forming to stop the protests–maybe with mixed agendas–but I am sure there are a lot of members in those groups who are concerned about the long-term business effects from the movement. I have heard the case from Anti-Occupy people in Hong Kong that even in the USA or other democratic countries there really isn’t a free election and that there is political corruption everywhere in the world.

In a way, a completely free election isn’t feasible, as maybe a K-Pop star would win by popular vote. There would probably need to be an electoral vote system like the Electoral College in the US.

Honestly, I have heard a few of my Western friends say things like:

Hong Kong is great, why are these people protesting, it is a fine city and business is going on well.

Do they know what they are really protesting for? Do they really know what freedom is? Many countries in the West have elections but really there aren’t great candidates to choose from and it’s corrupt anyway. Hong Kongers should be careful.

And the Facebook status messages go on and on, with lots of back and forth. But usually most Hong Kong Facebook friends bring up examples of how it is good now, but that there are signs of Beijing’s tightening grip and it is better to act sooner than later, when it is too late.

Freedom isn’t free. But the definition of freedom does seem to vary greatly.

I have already talked to people who are considering opening a Hong Kong company and bank account but that have been hesitating more because of this unrest. And I have to say I do understand their concern.

Fear and unknown are dangerous for a business environment.

I have also heard a few friends moving money to other countries, or at least some of it.

Personally, I haven’t changed my business stance in Hong Kong, but sadly I am hearing others hedge or hesitate.

And I see this as the biggest threat and danger Hong Kong has right now. 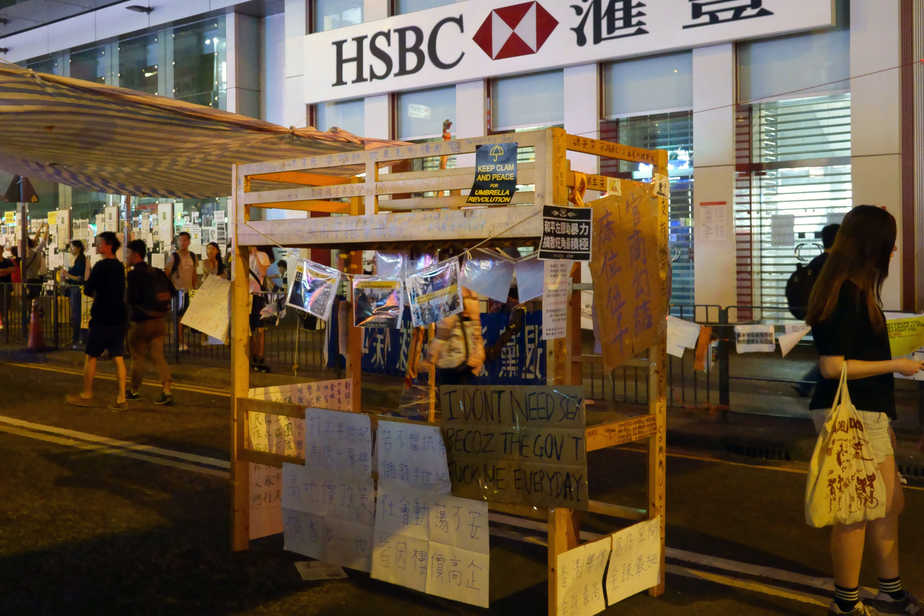 A wooden-framed bed was found in the Mongkok district of Hong Kong where protesters took over Nathan Road on Sunday, October 12, 2014. Photo by Wendy Tang

I don’t think Hong Kong will ever be completely treated like Mainland China. It’s not only international businesses that have Hong Kong as their international or Asian hub, but also Chinese companies.

These Chinese companies also want the flexibility of multi-currency bank accounts and lower import and export taxes and less paperwork. I have a company in both Hong Kong and Mainland China, and the Mainland Chinese company is a much bigger headache to operate and maintain.

I only use my Chinese company over my Hong Kong company when I have no other choice in a situation.

In the end, this is the main concern a businessperson should have. But this won’t happen right away, and maybe this is what these protesters are trying to prevent.

I also believe China has its own reasons to keep Hong Kong as a “special business zone” for the long term, so we shouldn’t be too worried honestly.

Singapore and Shanghai to Benefit?

I have heard discussions with business friends at bars and cafes that they should consider other places. Top contenders in the Asia business scene are Singapore and Shanghai.

Singapore is a direct competitor to Hong Kong as far as business establishment. The main reason I advise choosing Hong Kong over Singapore is the proximity to Mainland China and the Chinese Yuan, as well as the network of Chinese companies that also have a Hong Kong company.

But it seems this benefit has also become a threat. Those who don’t plan to do business in Mainland China may more seriously consider Singapore now.

Shanghai has been working hard on contending with Hong Kong, recently opening a Pilot Free Trade Zone to test the waters with a tax-free area for imports and exports. That has been a benefit for Hong Kong for many years. And the internet, I believe, is “unfiltered” in the zone as well.

This is something I am sure businesses have already been exploring and testing. These political unrests may be pushing some in that direction.

Shenzhen, right across from Hong Kong, the place I live with my family, has been rapidly developing and improving financial and business centers throughout the city. There is a new free trade zone here developing as well. As a neighbor to Hong Kong, it is becoming more and more of a “threat” to be a serious contender.

I Pray for the Future of Hong Kong

I do have to say I am a bit nervous how this will turn out, both in the short-term outcome of the protest and the long-term stability of Hong Kong as a place to do business openly and freely.

A lot of Hong Kong people say the business loss is worth the ability to stand up for their rights. I do support the ability for a people to peacefully practice their right to protest; let’s just hope it creates a win-win and keeps the business environment AWESOME in Hong Kong.

Sadly, my website is already inaccessible in Mainland China. I really don’t want to get political, but this post will hopefully provide some ideas and perspectives on the business issues Hong Kong is facing.

Getting To Hong Kong (HKG) From Shenzhen Airport (SZX)

How To Lose Your Staff in Asia (and Globally)

6 Comments on “How Is Occupy Hong Kong Affecting Business”