This week’s show we are talking about my experience and a broad overview of cross-border e-commerce more on the export side. I did this as a presentation at our Global From Asia Shanghai meetup. I share some of the insights and the history of how cross-border e-commerce came to be and some perspectives being involved in the industry and watching it over the years from a China angle.

Today’s podcast is brought to you by Aurelia Pay. I use them for sending money to my Chinese supplier from Hong Kong – it is a cross border payment solution between China, Hong Kong and South East Asia. So when I need to make a payment to a Chinese supplier, I just hop in to place a remittance, pay to their HK bank account, and Aurelia Pay settle RMB within the same business day! Check them out

Thanks so much for listening everyone! I am working hard to capture content both online and offline, aka O2O. We are full steam ahead with the meetups, just had one a couple days ago in Hangzhou, working on recording this and Lorenzo has been doing an amazing job there. These meetups are growing and it is a great way to engage the community and see people who are taking action! 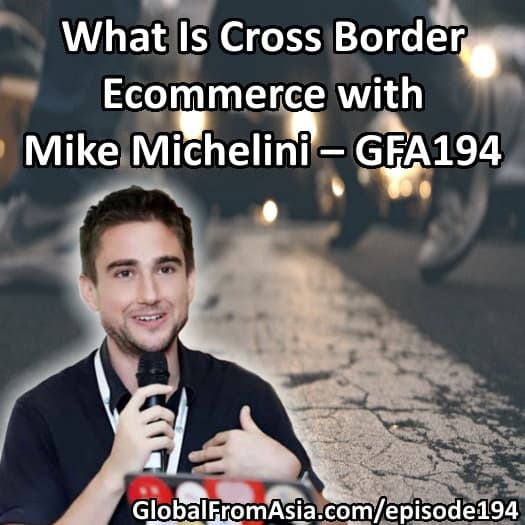 Welcome to the Global From Asia podcast where the daunting process of running an international business is broken down into straight up actionable advice and now your host, Michael Michelini.

Today’s podcast is brought to you by Aureliapay. I use it personally for sending money to my Chinese suppliers from Hong Kong. It’s a cross border payment solution between China, Hong Kong, and Southeast Asia. So, if I need to make a payment to a Chinese supplier, I just hop online to place the remittance, pay to the Aureliapay Hong Kong based big account and Aureliapay will settle RMB within the same business day. So, check them out online at www.aureliapay.com A U R E L I A P A Y .com or check them on their link at our show notes.

Mike: Okay everybody, Global From Asia podcast. What number we at, Angelica?

Mike: 194 shows. Thank you and I’m doing this from Shanghai, you’re in Manila and we are definitely Asia business going to Hangzhou in a couple of days, were got to have our 2nd Hangzhou meetup, our member Lorenzo has been doing amazing things for us, right?

Angelica: Yes, he is.

Mike: So he’s been always trying to get us come up. My first time ever to Hangzhou. It will be cool to see the community, he says amazing things happening there and I’m also got to get to see Alibaba’s campus. Alibaba really likes Global From Asia’s content and we’ve been contributing some content to them to their site as well. So, interested to check out what’s going on there. And then Lorenzo, actually you met him in Manila, so he’s doing great things and you got an audio interview. So we’re actually get to use that in the future podcast, which is pretty awesome. How about this member’s series, which member are we featuring this week?

Angelica: This week, we have Mike Caja of Truly Scaled Limited. So we already posted that last Wednesday on our forum regarding the link where they can read about Mike and hope they can check out our forum as well as Global From Asia Facebook page.

Mike: Definitely. I know you’ve been working hard getting current VIP members going and taking care of everybody. Also, Guiddo’s coming to the Matchmaker. He’s been excited, even talking to him. We’re just trying to get this global communities going. Then this week’s show, it’s me. I stucked on the mic while I was doing my speech in the Shanghai Global From Asia meetup this past Wednesday, September 20th. So it’s kind of an overview export e-commerce, Cross Border e-commerce, I’m talking about it’s history of what I believed Cross Border Ecommerce started. I get a little bit passionate some of this stuff. I might speak to our editor Boban and about cuts. But we might just live it in there. So it’s a little bit raw. Actually, I’ve been getting more bold, Angelica. Some of my friends are saying I might get in trouble one of these days somewhere. But this is one of them, we want to keep it real, we want to keep you guys interested and engaged. So, let’s tune in.

Mike: So like, what is Cross Border E-commerce? I think there’s some experts here, there’s might people better than I. But I think the history is eBay. I think eBay from what I research and when I talked about, they’re the pioneers. Well, of course e-commerce technically means is selling something form 1 country to another country. So a lot of people think Cross Border Ecommerce is Chinese Ecommerce. I do a lot of cross border commerce events and people come thinking it’s about selling on Jingdong or Tao Bao from overseas. That is definitely Cross Border E-commerce but of course e-commerce is also selling some to China overseas. Actually Google Cross Border Summit, there’s another cross border summit in the UK, that’s about Cross Border E-commerce in Europe to UK. So they are all about cross border in Europe. That’s also another type of Cross Border E-commerce. I always tried to clarify that to everybody. So I know we’re in China and we talked about selling in China and we’re going to talk about that today. But it’s really anything. So the story of eBay, I think a lot of you guys know Jack Ma kick their butt pretty hard in China. So of course they tried to do the marketing correct and localize enough. But what happens is ebay.cn is about Chinese factories to sell in the US or overseas markets. So it’s all about how to sell your goods overseas. And I think that start in 2006 or so. And from what I understand is the beginning of Cross Border E-commerce. Before that it was shipping part of B and B into America or into that market and selling it. But at that time people are start selling like mobile phones from China directly into the US market. So I think it really started that way. Then also people start selling into China and technically Cross Border E-commerce needs to sell B to C if this is the consumer from Hong Kong, I don’t want to get a political fight but it’s a border. I’m not got to say if it’s China or not but is the the border and has to go import into China. And then the taxes are doomed, Dom will talk about in more details is better that taxes are doomed to the person receiving it. So that’s the real definition. And then there’s 3 parts of cross border or actually any kind of e-commerce really. There’s the seller which I said is a gladiator. There’s the marketplace, even a shopping cart technically is a marketplace. But basically its Amazon, or Taobao, TMall or even WeChat stores are kind of marketplaces. And then there’s this flyers where you get your product. So I just like kind of high level of understanding of the ecosystem. And then this I’m sure you guys know him.

Mike : Basically, he said he will reply to my email. I emailed Jeff Bezos at Amazon, I pulled it up coz I got a new seller account. And it helps now. Its free of help. It’s Dominic on the way here, all these gatekeepers they are very strict now on new accounts. So you know, but he has all the power. I have to get on Amazon. Of course I got on my shopping carts and other things but I think if you’re selling in the US or most international markets maybe, China doesn’t matter on most places, you need to work with him, if you’re a seller or a gladiator, I don’t think he really cares about us. So, he cares, of course, while I talked about CEO. A CEO actually has 3 parts. You’re selling to your customer, your employees, and the owners or the shareholders. I don’t think sellers fits into that neither. But basically, he secure, more about his customer which is the buyer. Not the seller and his investors, shareholders. So he has tons of power and for a seller we have to listen to his rules and do what he says. There’s a funny picture about a couple of months ago he’s going to a conference and he was walking like looking jack dude and he had a picture in 1999 of him looking like a geek. Like a nerd. And now he’s like, this jock dude like a military outfit or something.

Audience: That’s too much power.

Mike: Yeah, I mean they just bought foods and everything. It is a little bit scary. So if you’re doing anything, you decide which, I think I’m got to mostly talk in my talk right now about exporting. But you have to decide which market and then you have to decide which channel. So for my new startup I just started the new Amazon account. I’m spoken in the US, but a lot of people are trying to tell me, coz I’m doing all this live podcast. So people are saying, Mike I don’t think you should do, US is too competitive, you should go into Europe. there’s a lot of people who do Amazon Europe or I think australia is opening up soon. So some people might Singapore, I think have opened already. But you should choose which market you’re selling into, right? Of course the dream for all of us, the dream is to sell globally especially if you’re starting because it cost a lot of money so you have to choose your market first and then the product selection. So I’m currently into the collection right now for the new one. And this is pretty tricky. So there’s tons of software, we have software developer here. Ecommerce software is huge, all these data, its big data really. I think just the Ecommerce seller, you have to be good at data. I know David say right. You are fond of looking at your data all of the time. Too much numbers. So I think Ecommerce sellers have to be analytical, have to look both before you buy, before you decide to buy a product. So there’s tools like you can at Amazon, you can use this data for anywhere. But, it’s might best to use it in the market for what you’re selling. You can use tools like Amazon tracker, Jungle Scout, you know other tools like, which one do you use?

Mike: Alright, that’s it for www.globalfromasia.com/episode194 at the, that was our Shanghai Global From Asia meetup. I have another one with Dominic from Tmall. We’ll talk about importing into China with e-commerce and cross border e-commerce, which is a great one too. We’ll be using that in the future podcast so stay tuned for that. Thank you everybody and we’re doing meetups all over the place more and more. We also have a podcast coming up with Lorenzo on Friday. Well, he actually got an exciting news for us and some updates on Paraliving Inc. I’ll save it til Friday, but thanks guys for listening. I’m still on the road. I’m in Hangzhou right now recording this [00:31:14]. Things were moving fast and hope you guys are making moves in your business. Stay motivated. Stay positive and make things happen. Alrighty? Have a great day everybody and cheers.